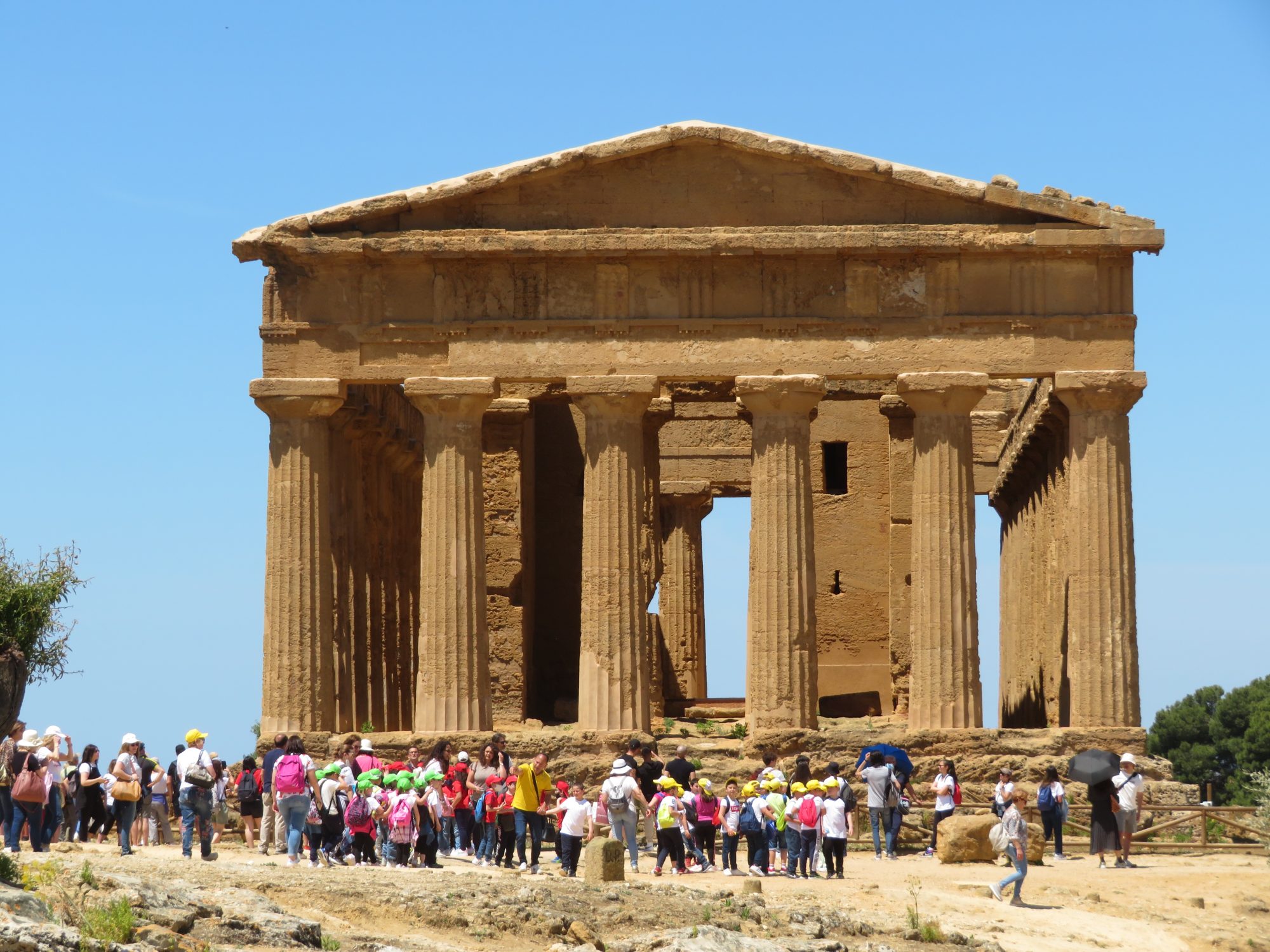 Our train ride from Palermo to Agrigento was packed with an amiable crowd of commuters who chattered to one another in Sicilian until they fell asleep, all at once, as if on cue. We traveled east along the coast with the sparkling deep blue Mediterranean on our left, steep hills with perched houses on our right. Once we turned south into the interior, agriculture dominated the valleys – wheat, artichokes with red poppies and yellow meadow marigolds, gigantic prickly pear cactus, citrus groves and and olive trees. Dirty windows and an inability to move from my crammed-in seat means no pictures, alas.

Our abode for the night was the lovely Terrazze di Montelusa, hosted by the charming Franceso Foti and his two cats (who enjoyed engaging guests in game of “beat you out the door”). The room was lovely, and the garden terraces were divine – appropiate, I suppose, since they overlooked the Valley of Temples located downhill and just a few kilometers to the east.

After touring the premises, settling into our rooms and a quick shower, we took a walk through Agrigento’s Kasbah neighborhood, just uphill. There are only two directions in Agrigento – up and down.

With dusk closing in, we found (after a few false starts) one of the restaurants recommended by Francesco, Ruga Reali, and enjoyed a delicious dinner in their lovely courtyard (accompanied by several cats).

After a delicious buffet breakfast on the terrace, we girded our loins for the terrifying part of the trip: collecting the rental car. Sicily delights in requiring one-way auto routes through lanes barely wide enough to pass a car, giving ample time to exploit the navigator’s terror while circumnavigating the town. Fortunately, we had Franceso, who gave us directions clear and comprehensive enough that I even I could follow them.

Now for a brief sidestep into history. Agrigento has been inhabited by at least two more-or-less native tribes since prehistoric times. It enters European history around 580 BCE with the Greeks, who were busy colonizing their known world. Sicily was colonized by Greek (or Mycenean) colonies in Crete and Rhodes who called their new home Akragas. The site chosen for the new town was located on a hill with comanding views of the countryside and harbor below. To protect themselves from the many “others” who were also bent on colonizing this strategic location, the city was walled, with a series of temples located around the permimeter to serve as both temporal and spiritual fortifications. After changing hands a few times among the quarreling Greek factions, the Romans entered the scene, followed by the Arabs who called the city Girenti – hence Agrigento today. The modern town is located farthern inland on a ridge above the ancient town.

Significant bits of some temples managed to survive, helped, in some cases, by a crazy Englishman who spent his fortune preserving and even re-erecting pillars on some sites. The Temple of Concordia (all names are made up by 19th century enthusiasts, since no one knows who was really worshipped where) is the best preserved Greek temple outside Greece.

We ditched the car at the Porta V parking lot, location of one of the 9 identified gates to the city, then took a taxi to the entrance on the other side of the valley (about 3 km away) and began our tour at the Temple of Juno.

Their were, once again, mobs of visiting kids, this time of the primary school variety. Their minders kept track of them by dressing them all in bright, fluorescent T-shirts and matching hats, creating the impression that flocks of gaudily colored, chattering birds were swooping through the site.

The Valley features permanent kids of another variety. These Girgentana goats were once widespread and are now on the verge of extinction. A small flock has been introduced here in hopes of saving the species.

Sir Arthur Hardcastle, that eccentric Englishman, built a villa with gardens and took up residence in the middle of the site. He partially restored the Temple of Hercules, reassembling fallen columns.

The Temple of Hercules contained massive stone statues (“telemon”) ranged along both sides . This temple is the earliest, and stood over 4 stories tall.

An ancient cistern, called a kolymbethra in Greek, is now a garden filled with citrus, herbs, vegetables and ancient olive trees.

After completing the circuit of temples, we hopped in the car for the short drive (made longer by getting lost) to the museum.  The museum mostly featured pots (lots and lots of pots) as well as the reassembled telemon pictured above. Some interesting bits…

3 thoughts on “Agrigento & the Valley of Temples”