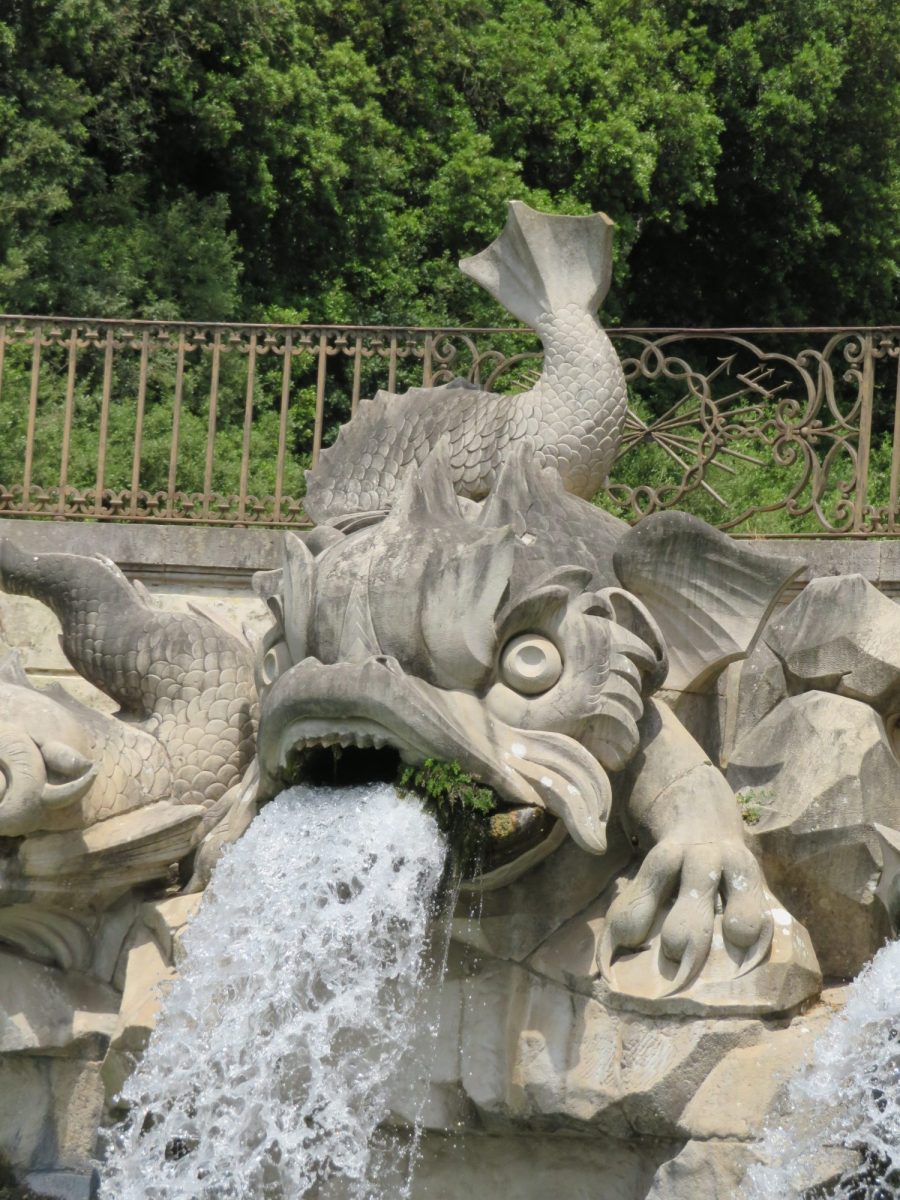 Monday morning found us back on the Freccia Rossa, Italy’s high speed train, at 8 am, headed out of Roma Termini towards Napoli Centrale. Our itinerary was simple: spend the morning at the Reggia di Caserta (Royal Palace of Caserta), located about 20 miles north of Naples, then hop the train and spend the afternoon at the National Archaeological Museum of Naples.

Huh? The Reggia di Caserta? Who ever heard of that? Not us, until we happened to stream Meraviglie: A Tour of Italy’s Wonders on Mhz Choice (highly recommended). The Reggia turns out to be the largest royal palace in the world. It was built in the 18th and 19th centuries by the Bourbon clan who ruled Sicily and southern Italy at the time, and who were determined to outshine their French cousins by building bigger than Versailles. And bigger it is…oh, my.

It’s really hard to get a sense of scale without being on site. Quoting Wikipedia:

“The palace has 5 floors, 1,200 rooms, including two dozen state apartments, 1742 windows, 34 staircases, 1026 fireplaces, a large library, and a theatre modelled after the Teatro San Carlo of Naples.” And the palace was never finished – there was supposed to be another wing.

The gardens spread across 120 acres. The “Long Walk” within the gardens follows a series of water-filled pools, interrupted by fountains, connecting the palace to a more-or-less natural waterfall more than 3km away. We scratched our heads over why this place doesn’t show up in Italy tour guides – it is an amazing place. I’ll walk you through my pictures of all this immensity using Google Earth screenshots to (hopefully) keep us oriented.

First, the palazzo.The Caserta train station is literally across the street from the palace’s front garden, making access very easy. The Italian Air Force occupied much of the palace from 1923 until ~ 10 years ago, using it as a training academy. There were increasing rows between the aviators and the culture ministry over lack of maintenance (featuring in structural cracks), and the Air Force was finally booted in 2014, with a lot of renovation work undertaken since.

This baroque elegance gets even more over-the-top on the 2nd floor (or 1st floor, in European parlance) as we move through the piano mobile (state apartments) to the throne room.

We came across a number of pieces of contemporary art offering an interesting contrast to the Bourbon pomp, but neither the interpretative signage nor the audio tour mentioned this exhibit. We would have liked to learn more.

On through sala after sala after sala. How far you made it through this procession of stately rooms during Bourbon times depended on your status in the political hierarchy.

The grandeur continues in the “private” apartments of the king, queen and royal offspring.

I was fascinated by the flowery (and exceedingly ugly IMO) glass chandeliers dangling in so many rooms. I could easily imagine a Star Wars storyline about camouflaged aliens…

My favorite part of the palazzo was the Presepe Reale, or Neapolitan nativity crib. The “crib” was an annual court project: creating dioramas of the nativity using images drawn from Neapolitan life. This (reconstructed) crib is from ~ 1860, the last Christmas before the Bourbon clan was thrown out and the various kingdoms were unified as the country of Italy. The various scenes occupy over 430 sq. ft. and have 1200 figures. (Crystal, you would love this.)

After all that Baroque opulence, we were ready to reconnect with reality through a walk in the gardens.

We left the palazzo by the back entrance, walked through the lawns (sticking to the paths, grazie), then detoured into the trees on the left in search of shade.

Eventually, we worked our way back to the center to join the Via d’Aqua on the Long Walk.

Wee walked and walked, past pools full of happy, well fed carp to the Fontana dei Tre Delfini (Fountain of the Three Dolphins).

After another 15 minutes or so, we came to the Fontana di Eolo (Fountain of Aeolus, the Greek Keeper of the Winds). In this vignette, Aeolus is unleashing the fury of the winds against the Trojans.

Another 10 minutes walking brought us to the Fontana di Cerere (Fountain of Ceres, Greek goddess of growing things).

Finally, after another 5+ minutes walk, we reached the Fontana di Diana e Atteone (Fountain of Diana and Acteon) and the waterfall.This fountain tells to sad tale of a young man who accidentally came across the nude goddess Diana as she was bathing in a pool. Her modesty offended, Diana transformed him into a deer. His dogs then chased him down and killed him.

A turn to the right took us into the English Garden, which has a folly (imitation classical ruin) called the Criptoportiico I was especially interested in seeing.

The Criptoportico attempts to recreate the feeling of stumbling across the ruins of Pompeii and Herculaneum before they were excavated. It’s a long semi-circular corridor built into a cave, studded with statues and peeling frescoes, and punctuated by vine covered holes in the ceiling. Very atmospheric! Sadly for us, happily for the folly, the whole place was being renovated, so we could do no more than peek around the corners. Sigh.

Tired from walking and broiling in the heat, we queued for the shuttle bus instead of walking 3km back to the palazzo.

A train ride of less than 45 minutes landed us at Napoli Centrale (Naples’ main train station) where we caught the Metro to the Museo Archeologico Nazionale di Napoli (MANN, or National Archeological Museum of Naples). This museum is noted for its collection of Greek and Roman statues (assembled by fair means and foul in the 16th century by a member of the Farnese family who became Pope Paul III), and for housing most of the treasures found at Pompeii and Herculaneum (collected by the Bourbons) when those cities were first excavated in the 18th century. We visited Pompeii on the following day, so I’ll include the Pompeii artifacts in the context of the Pompeii travel blog.

The statuary was quite spectacular.

This group, called the Toro Farnese, tells a story of abandonment and revenge. A Greek king named Lycus was bewitched by Dirce. He abandoned his pregnant wife, Antiope (standing in the back of this group), who gave birth to twin boys and raised them as a single mom. When the boys grew up, they killed their dad and tied Dirce to the horns of a bull to be bashed to death on a mountain. The action in this group is so realistic I could imagine the players springing to life.

Wandering around in the MANN.

Leaving the museum in the late afternoon, we made our way back to Napoli Centrale by wandering down a main drag, then through one of Naples’ old neighborhoods.

We enjoyed a pizza dinner at a sidewalk cafe, then walked the final few blocks to the train station for the trip back to Rome.