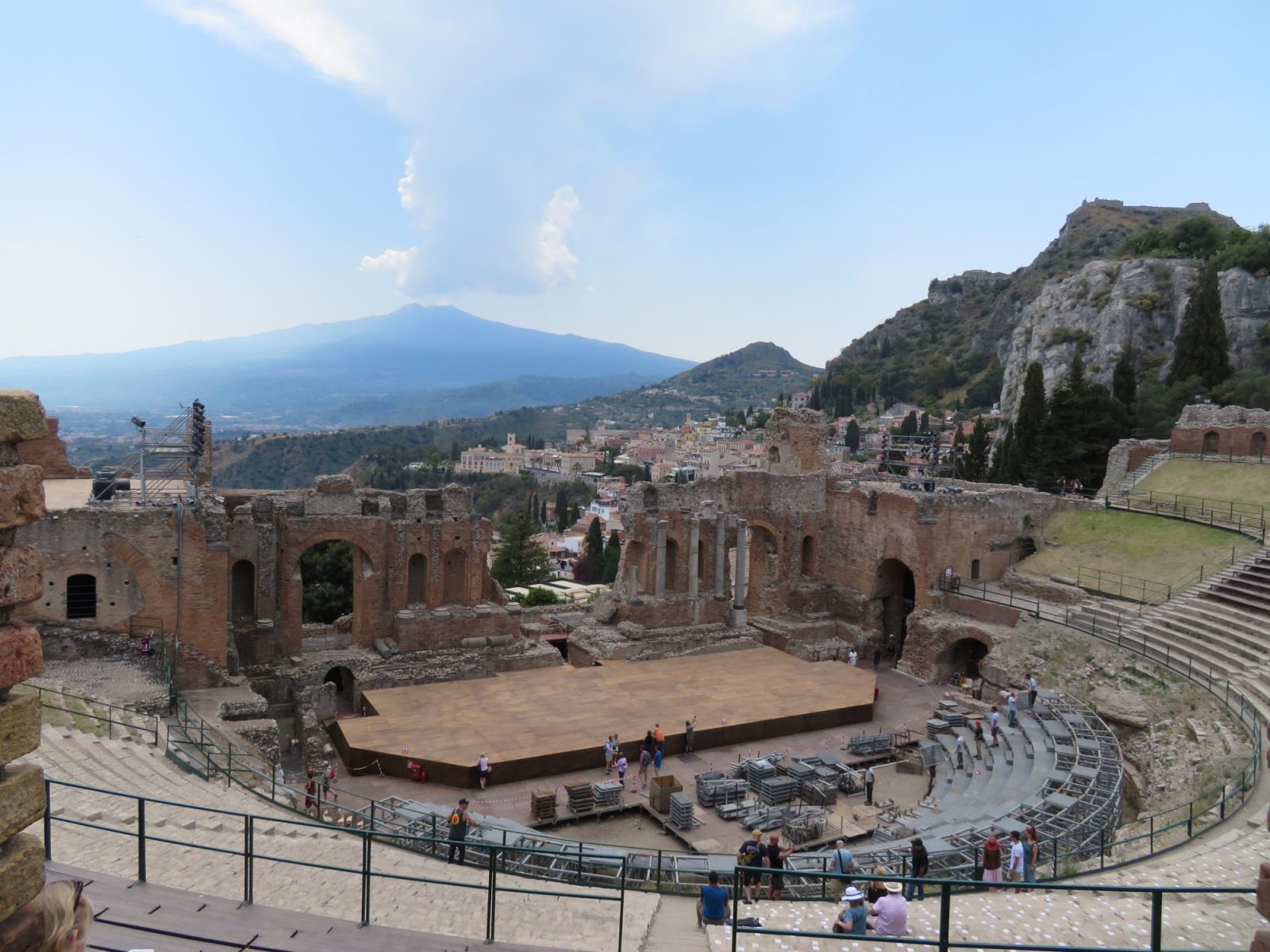 Each morning in Taormina began with this view.

Taormina sits several hundred feet above the sea, buildings snuggled into crannies and crevices accessible through narrow sinuous lanes. (Not as narrow as Ragusa, thank the auto-gods.). Casa Manuel, our base, is located at just about the highest point in town, just below Chiesa Madonna della Rocca, a tiny chapel carved into the rock.

To walk down into Taormina proper, we first had to walk up, past the Madonna in the Rock…

…then down several hundred stairs, with stunning views of the city and sea far below…

…to arrive at city lanes with – you guessed it – more stairs. We walked down this lovely route several times, but used the old folks’ method of bus or taxi to go back up.

Porta Catania and Porta Messina anchor the two ends of Taromina’s main drag, Corso Umberto I (yes, another one). These former gates date to the days when Taormina was walled, with the main road between Catania and Messina going through the center of town.

Taormina has been a destination for the wealthy and artistic since the 19th century, when philosopher Johann Wolfgang von Goethe put it on the European Grand Tour itinerary after falling in love with the idyllic setting. The action along the Corso Umberto features gorgeous (and over-priced) goods and more restaurants and cafes than anywhere we have ever seen. Nonetheless, Corso Umberto provides a lovely – if crowded – route for strolling.

Piazza XI Aprile – and the view down from the center of town.

Taormina has a marvelous garden, the Giardino della Villa Communale. It was created by Florence Trevelyan, who came from minor gentry in Northumberland. As the story goes, when Florence’s father committed suicide, Queen Victoria took Florence under her wing at Balmoral, where they shared a passion for gardening and dogs. It was an idyllic relationship until a dalliance with the Prince of Wales (who dallied with just about everyone) caused Victoria to banish Florence from Britain with an allowance of 50 pounds per month. Florence set out on her Grand Tour, fell in love with Taormina and never left. She built an eccentric home-cum-garden on Isola Bella (stay tuned), then married Taormina’s mayor. He was part of the family that owned (and maybe still owns) most of the town, and he gifted this extensive plot of land to his bride. Florence and her mother had created public gardens in Northumberland, so Florence set about creating a public garden here, and gifted the park to the city on her death.

Florence delighted in creating follies (fake ruins) from architectural scraps. They have fallen into disrepair but are being restored.

Near to the gardens is the Naumachie, a set of Roman-era arches that once supported a large reservoir. The name comes from mock naval battles that the Romans liked to hold on these basins.  The arches were discovered after WW2, when Taormina (like most of coastal Sicily) was extensively bombed. Modern apartments have been built on top of the arches.

And now for Taormina’s antiquarian claim to fame: the Teatro Greco. A bunch of Greeks from Naxos founded a colony in the 8th century BCE on the coast below,  at what is today Giardini-Naxos (the city on the tip of peninsula when looking towards Etna).  When the ruler of Siracusa (the Greeks called them Tyrants, which seems apt) decided to expand his territory to include “new” Naxos, the survivors moved to higher ground on Monte Tauro, the Mountain of the Bull – or Taormina today.  The Greek theater that survives dates to the 2nd century CE, and it did not disappoint.  Modern performances are staged here, but the production infrastructure doesn’t overwhelm the ancient space as it did in Siracuse.

Leaving Tetro Greco, we strolled back along the Corso to the Piazza Duomo, where the fountain features mer-dogs and the church sports columns that were once part of a Greek temple.

One night, we had a fabulous dinner at Adduma, the restaurant where our host Massimo worked.

Each evening in Taromina ended with a fireworks display from Etna.