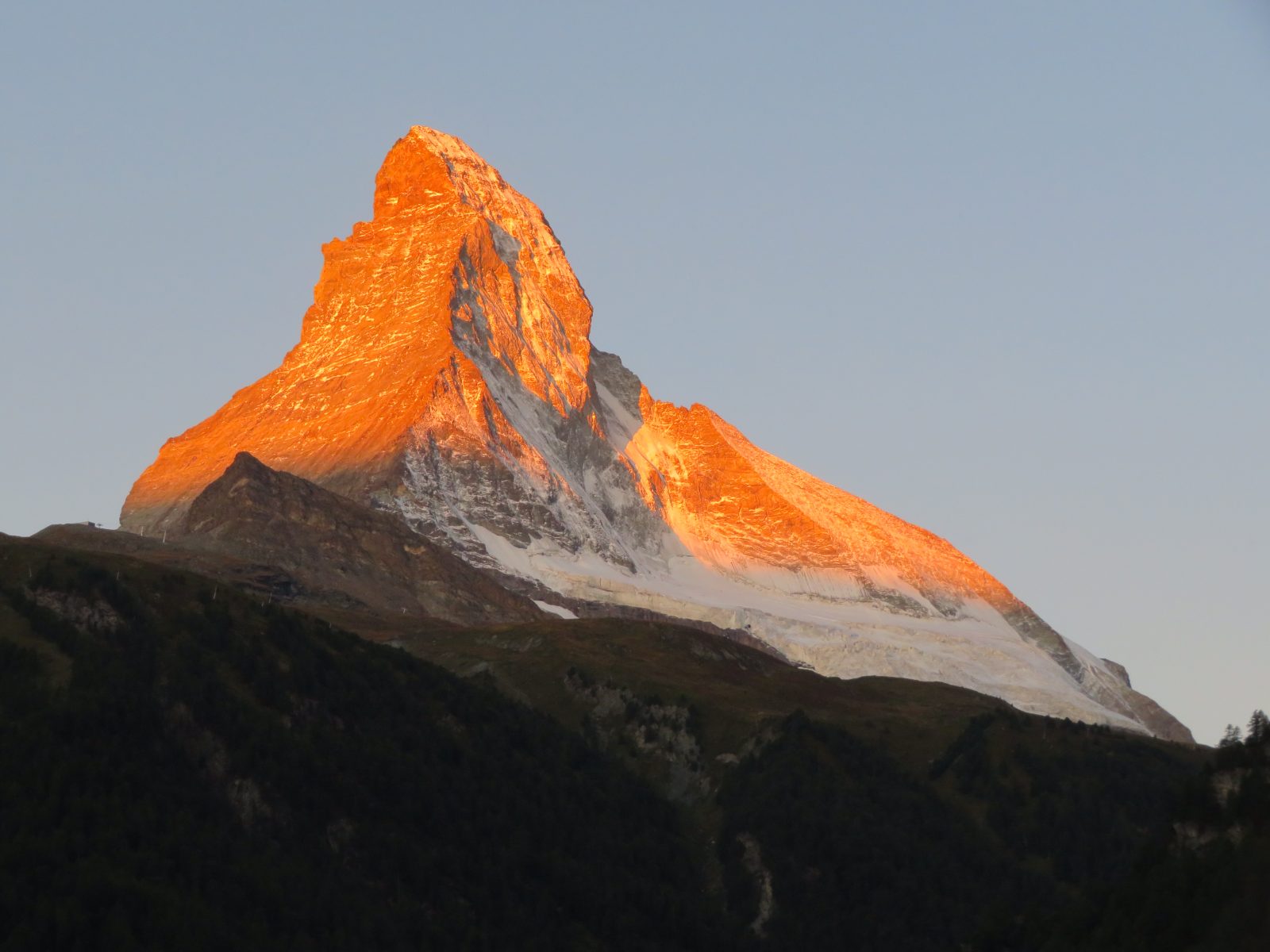 The Matterhorn caught the sun before we did on our first morning in Zermatt. We have stunning views of the peak from our chalet.

The town of Zermatt nestles at the end of a very deep, steep-sided valley, with houses clinging up and down the slopes and our chalet is near the top.

The day was brilliant so we set out on a journey up to Gornergrat, one of many peak-top winter/summer resort destinations.

Instead of descending down the log hill into town, we decided to catch the Gornergrat cog train at Findelback, just a bit uphill from our chalet.  Unfortunately, we decided to take short cut – which turned out to be the longest hike of the day. But there were many sights to see as our guides disputed the best route while toiling up and down hills.

The Findelbach station at last! (And no one murdered anyone on the way up, although it was touch and go at times.)

After an intercom discussion (in German) we made it on to the platform.

After further internal disputation about where to stand, we managed to catch a train headed up the mountain.

Up top on the Gornergrot platform, four of us stood looking longingly across the turnstiles while Matt and Ken T wandered around in search of a place to purchase tickets. Although the Gornergrotbahn says you can catch the train at any stop and pay at the top, they don’t make it easy.

The Gornergrot hotel (Kulmhotel 3100) was built in 1910, replacing an earlier hotel built in 1896 – the golden age of alpinism and empire. (Yes, the Brits were here.)  The planetarium, accessible only to guests, was added in 1966. Competition must be fierce among these mountaintop visitor lures.

There were some interesting educational exhibits scattered across the viewing platforms. One featured women alpinists.

Another exhibit aimed at educating visitors about plastic waste.

Further up the slope was another platform and a tiny hike.

They ski on these slopes in winter. The moguls must be gigantic, given all the rocks.

The sound of music took another form on the upper viewing platform.

We took the 20 minute walk round the semi-summit.

Back at the Kulmhotel, we found a table on the terrace and lunched with a grand view of that same buttinski peak.

After lunch, we boarded the train and separated. The Foursome rode to the next stop, Rotenboden, then walked down to Riffelburg and re-boarded the train for the descent into Zermatt. Matt shared a picture from their walk.

Domq and I traveled all the way down in the very first car, occupied almost entirely by old folks like us.

At the bottom, we dodged electric vehicles and hoards of people down the main shopping drag. Zermatt reminds me of Vail, Colorado – or what Vail aspires to be. It’s very commercial and feels unauthentic – except for remnant old bits in the überdorf.

The caption of this ad reads something like “this is what it feels like to live with lung disease.”

Today was Ken R’s birthday. We celebrated with an excellent stir fry created by chef Domq and her sous chef Judy, followed by truly decadent desserts and chocolate Matterhorn truffles from Fuchs bakery and chocolate shop.