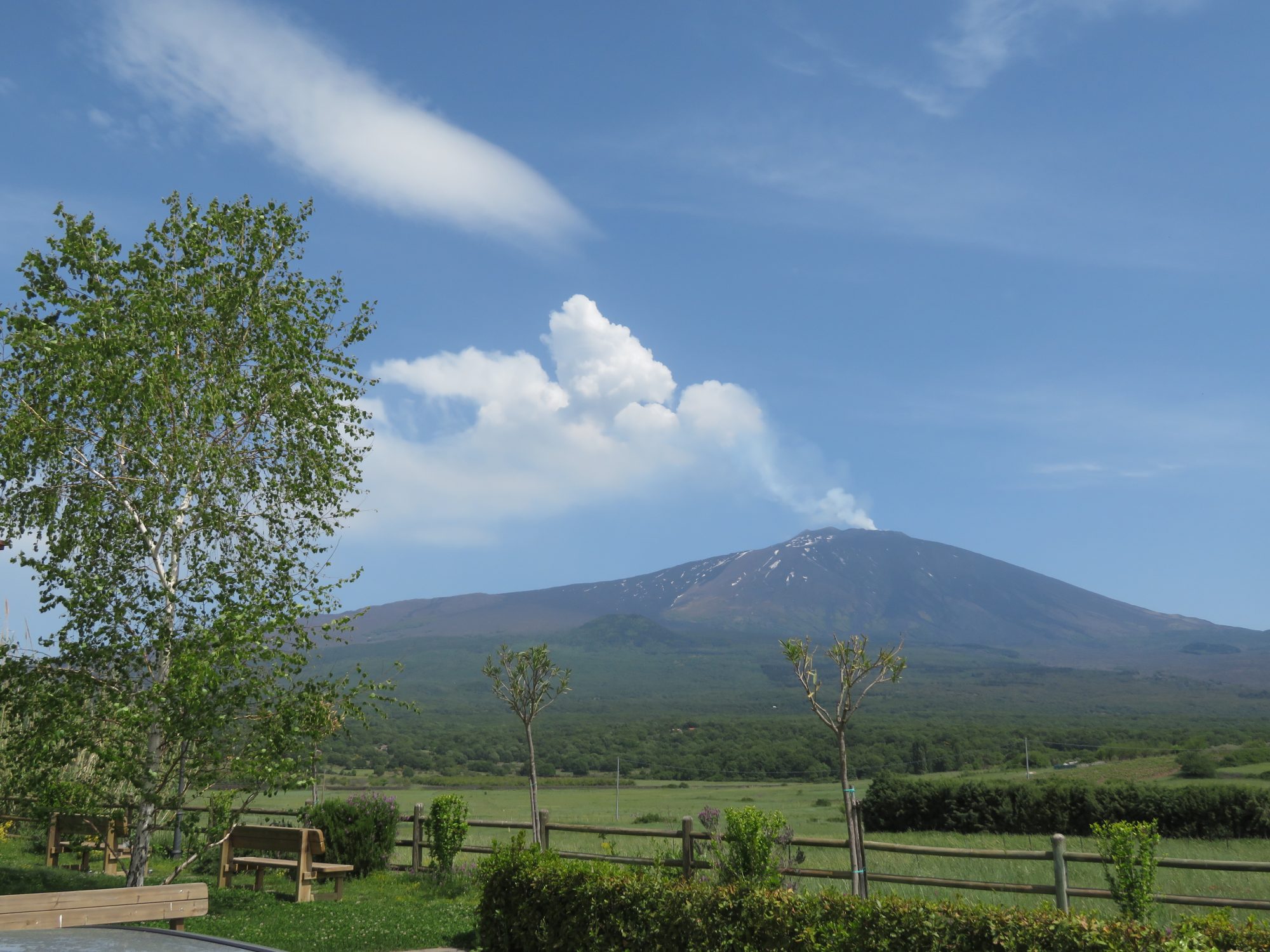 Etna dominates the landscape in northeastern Sicily, looming above everything at ~ 11,000 feet, its elevation changing constantly with eruptions.

Etna is an extremely active volcano – locals say they feel sad when it is not actively smoking and spewing lava. Instead of one central crater, Etna has many vents at various elevations, relieving internal pressure and preventing the mountain from blowing its top. Lava flows move relatvely slowly, but still regularly engulf houses and villages. On Wednesday, we journeyed up and around the volcano to see Etna at work.

We passed through Zafferana Etnea and journeyed on to Rifugio Sapienza, a tourist mecca for the volcano-obsessed. We traveled up the eastern side, driving through what guidebooks describe as a lunar landscape. Scarred and rocky, yes, but an awful lot of green for the moon, methinks. There were a surprising number of trees – birches and tamarisks mostly.

After parking the car (and figuring out how to pay for parking, not an the most obvious thing) we took the gentle walk around one of the Crateri Sylvestri, conveniently situated next to the first of many restaurant/bar/gift shop complexes.

Having successfully circumnavigated the crater, we decided on the old folks’ route and rode the cable car up to 8200 feet. (Forty years ago we would have walked, but that was 40 years ago.)

From the top of the cable car, one can catch a bus up another 650 feet for a walk to a summit, but we didn’t feel like spending 3 hours crunching through cinders so simply clambered around for some views.

Leaving the tour bus craziness behind, we headed south to Nicolosi, then turned west and north to travel around Etna’s west side to Bronte. The south and west sides showed evidence of much more recent lava flows, including swallowed buildings. We were driving, and pull-out viewpoints don’t seem to be a thing in Sicily, so pictures were taken as we flew by.

Bronte is Sicily’s pistachio capital. Etna’s eruptions create very fertile soil (probably why people put up with living here) and the pistachio trees seemed to thrive on what looks like barren rock.

We were deep into afternoon shutdown by the time we got to Bronte looking for lunch, and were lucky to find this lovely highway rest stop-cum-bar, with friendly wait staff, just outside of town.

At the top of the north side of the Etna circuit lies the little town of Randazzo. We stopped to poke around, drawn by the prevalence of basalt (lava rock) used in the town’s architecture.

An enjoyable diversion!  And with only minor squabbles with Google navigation, we arrived back in Taormina for the nightly Etna fireworks show. Photo credits to Matthew, who figured out how to use the special features in his spiffy Android phone.