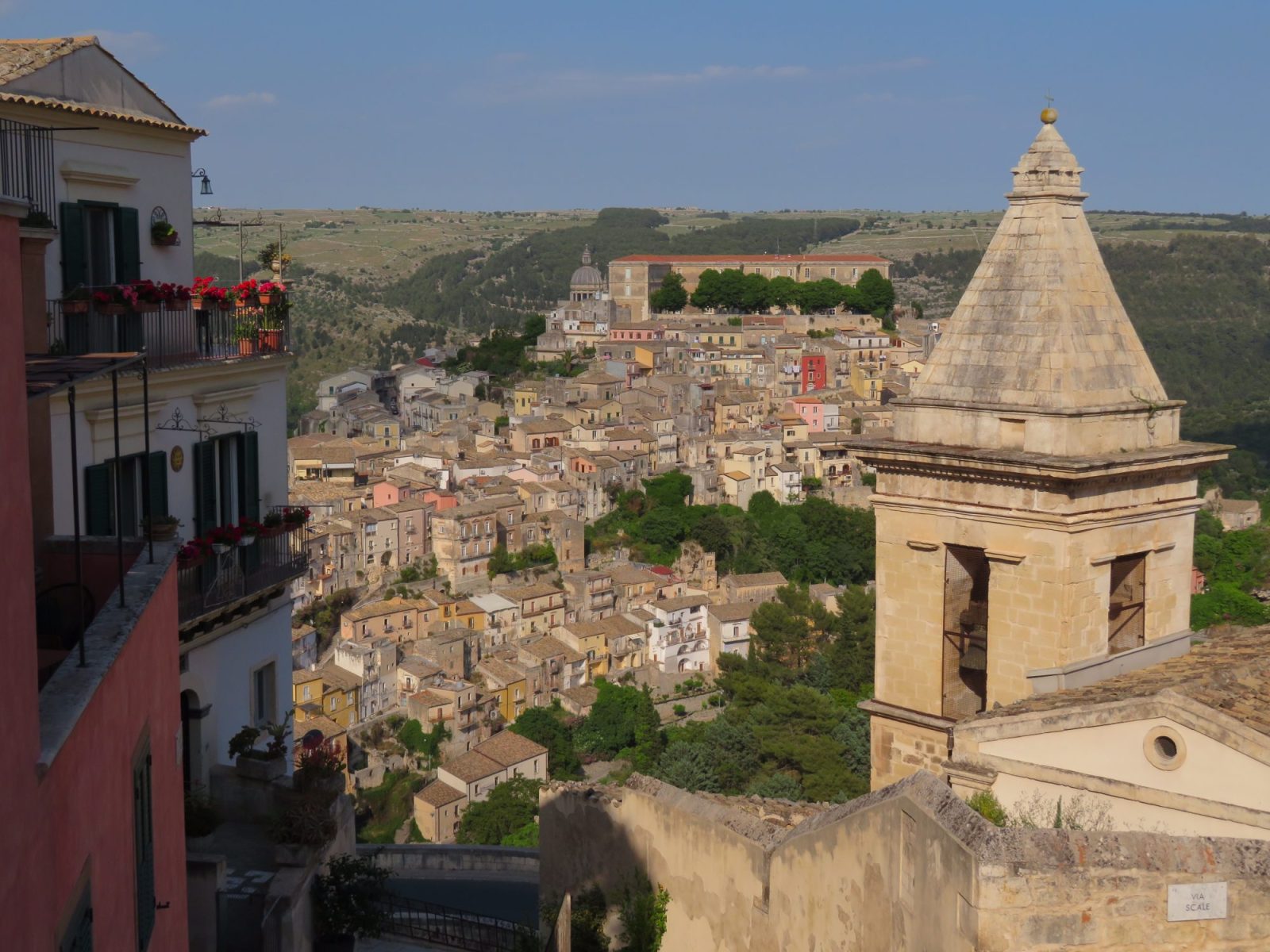 The drive from Agrigento to Ragusa is about 2.5 hours, made only slightly longer by getting lost about 6 times. (We’ve learned to dread that Google maps’ geboing that means “missed the turn again stupid.”)

We passed miles and miles (literally) of hooped hothouses for growing vegetables, often filled with enormous tomato bushes. Sicily is a hilly island, and every semi-flat surface has been turned to use for olive and citrus groves, wheat fields and hoop houses. We were treated to lovely views of the deep blue Mediterranean Sea, but I was too busy navigating to look.

A bit of orientation: In 1693, a massive earthquake destroyed most of the buildings eastern Sicily, killing an estimated 60,000 people. The hill towns in southeastern Italy were rebuilt in the flamboyant Baroque style favored by the Spanish Bourbons (rulers of the moment). The region we are visting is known as the Baroque Triangle because it contains several gorgeous rebuilt hill towns clustered reasonably close together.

Ragusa is two towns divided by a deep ravine. When the 1693 earthquake hit, most citizens decided to abandon the old town and rebuild on higher ground (Ragusa Superiore). But some stubborn souls stayed on and rebuilt the old town, Ragusa Ibla, where we booked an Air BnB.

We finally arrived in Ragusa and made the terrifying passage down a series of narrow, two-way hairpin curves into Ragusa Ibla. There we encountered a maze of narrow, winding lanes organized into an incomprehensible network of pedestrian only and one way passages.

After circumnavigating the town, we finally arrived at Casa Hybla, our lovely base for the next 6 nights. We were oriented to the house by our gracious host, Emanuele, in a mixture of his limited English and my bad Italian. Emanuele even directed our car into the garage, an experience requiring advanced auto acrobatics that we never attempted again.

Next morning, we wandered the streets in search of sustenance. Ibla is not a large place, and we undertook many wanderings, so here are pictures taken over the 5 days we were based here. Just down the way from our place is the Palazzo La Rocca, with marvelous Baroque-style grotesques clinging to the balconies.

The main square, Piazza Duomo, is dominated by the elegant cathedral of San Giorgio (St. George of dragon fame).

Like many Italian towns, Ragusa Ibla annualy hosts a gigantic festival in honor of the saint, who is brought out of the cathedral (in virtual and earthly form) and paraded around the square under arches of lights while thousands of people dance and shout. This year’s celebration was less than 2 weeks away, and preparations were already underway when we arrived.

We were finally able to slip inside the cathedral on Sunday, during and just after mass, with the aroma of incense permeating the space.

Matt received gelato money for his most recent (year not to be mentioned) birthday to be spent first at Gelati Divini, right on the square.

Strolling around the duomo and the main drag, the Corso XXV Aprile.

The lovely Giardini Iblei lies at the east end of town. A wedding party was entering as we passed.

Inside the gardens are two lovely little churches, San Giacomo (where we got a bit of an organ concert) and Sant’Agata.

Sant’Agata was a Capuchin church and built with wooden furnishings instead of the elaborate marble and plaster interiors of the baroque churches. It featured an exhibit of about a dozen dioramas made by local artists illustrating the life of Jesus.

On Wednesday afternoon, we took the bus to Ragusa Superiore so we could walk down the many, many stairs connecting it to Ibla.

One morning, as I was stretching on the terrace, I stopped to watch the workmen busy renovating the house across the lane. They were cementing a rock wall on the top floor by mixing cement in the garage, then hoisting it up in buckets using a pulley system. The guy on top dropped the empty buckets from the roof, beaning the guy below in the face. Unhappy words ensued.

We enjoyed dinner at Trattoria La Bettola one evening, and had our best meal at Trattoria La Rusticana. Their antipasto platter featuring typical foods from “the land” was amazing (including squash leaves – yea!), their arancini were light and crispy and the cannolo was heavenly.  For any Comissario Montalbano fans, this restaurant was used as the setting for Montalbano’s favorite restaurant, San Calogero, and the oh-so-picky inspector would very much approve.

And so farewell to lovely, lovely Ragusa Ibla.