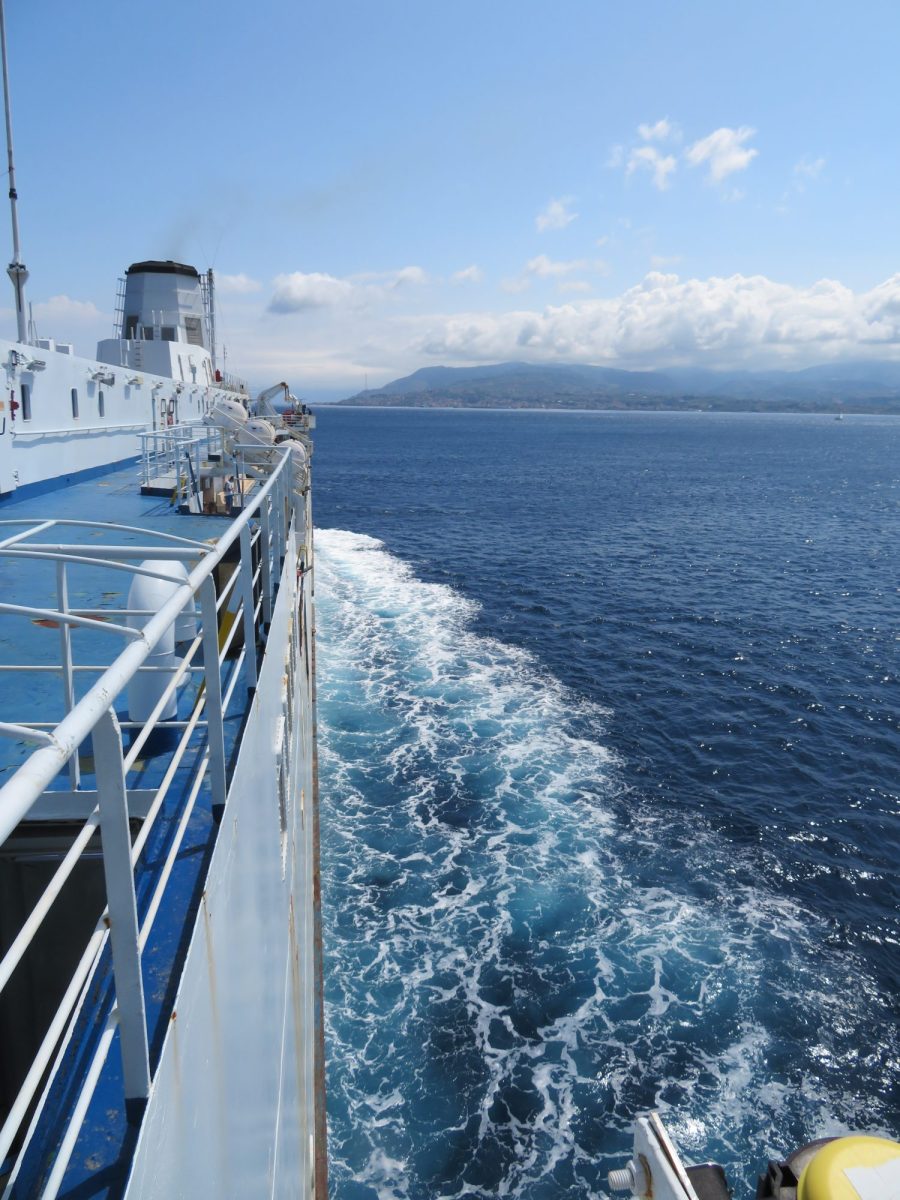 On Sunday morning, we said a lingering goodbye to Sicily via the high speed train to Rome.  It’s a long ride – 9-10 hours, depending on which train you catch – but we decided that views along the coast would make the ride worthwhile. We traveled in business class, which was very comfortable and fairly inexpensive for a reservation made well in advance of travel. Ironically, in a country pretty fixated on food, this train has no bistro car and the trolley service has been discontinued since Covid hit. So, along with our luggage, we lugged a large bag of food and drink along to stave off starvation.  Blog disclaimer: because we were on a fast moving train with not particularly clean windows, pictures may be somewhat more aspirational than usual.

We taxied down to the Giardini Naxos stazione to catch the train.  While we waited for our train to arrive, a pair of very polite police officers strolled the platform checking passports.  This picture is from a later stop, at the first station on the Italian mainland, when police also came on board to check passports We scratched our heads over what they were on the lookout for, since there was no easily discernible profiling to the people they checked.

Departing Giardini Naxos, we chugged up the eastern coast of Sicily past Taormina (as well as Svoca and Forza d’Agrò, which were “Corleone” in the Godfather movies) to Messina, a major port on the island’s northeastern tip.  From Naxos, the landscape was typically Sicilian: jagged peaks and deep ravines, medieval castelli and baroque villages perched on ridge tops, prickly pears and olive trees, flat-topped houses painted in tangerines, beiges and yellows crammed into the valleys and along the train line. Remnants from last night’s rains were evident in thick cumulus clouds crowding the ridge tops. The Ionian Sea was on our right, a long expanse of nothing but blue.

As we reached the northern tip of Sicily, Calabria (occupying the toe of the Italian boot) loomed ever closer in the east. Development became much denser as we approached Messina

Because there is no bridge, the train has to be loaded on a ferry to cross the Strait – something I was really looking forward to seeing.  Our train, which originated at Siracusa, was joined on the ferry by a train originating in Palermo.

For those who remember your Greek mythology, the 3.3 km wide straits of Messina (from which the town derives its name) are guarded by the monsters Charybdis, who generated a whirlpool on the Sicilian side, and Scylla, who devoured sailors caught in said whirlpool on the Calabrian/mainland sid). Odysseus had a famously rough time passing here, losing 6 sailors to Scylla’s maw. The town of Messina was founded as a Greek colony in the 8th century BCE and has been a major trading center through the centuries ever since. We had about 30 minutes to roam the ferry as we crossed the strait. The Italian passengers, wise to the ways off a train with no food, stocked up on arancini and and snacks in the ferry lounge.

We waited at the Villa San Giovanni stop for about 45 minutes while the trains were unloaded and connected for the trip to Roma.

Houses were crammed right up against the track at Villa San Giovanni next to a rather decrepit industrial area. As we chugged towards first stop at Gioio Tauro, the setting became agricultural: orderly rows of olive and citrus trees interspersed with vegetable plots – mostly uncovered, although shade cloth appeared here and there. It was a mix of small holdings and large industrial operations, including my first glimpse of a large solar array.

As we pulled away from Gioio Tauro, the sea reappeared. It was a landscape of beaches, resorts and marine villas on the left, with hills marching to down to the shore on our right. The hills had their share of olives, but seemed more temperate than Sicily, with a greater proportion of deciduous trees and shrubs and very few prickly pears.

From Paola, a tiny little provincial station, to Sapri, there were large stretches of beach created by stone breakwaters and artificial lagoons. The houses seemed larger and wealthier. We crossed rivers with wide beds and a lot of gravel, with narrow channels of muddy water running through the center. We also passed through many, many tunnels in this stretch, and spent some quality time sitting in one of them.

The line from Sapri to Salerno took us inland, through hilly ranges punctured by 2 or 3 dozen tunnels. I was struck by how much greener the landscape is here than in Sicily, with deciduous trees, shrubs and herbs blanketing the landscape. We began to see wheat fields in this stretch, some with sprinkler irrigation systems like we have in North America. High rises began popping up as we approached Salerno, with the Amalfi Coast coming into view in the background.

Salerno is a big, grubby city with orchards and fields around the perimeter. We rolled through a suburban corridor, alternating with agricultural fields, from Salerno to Napoli. Shadecloth was back in fashion, covering acres of plants.

Our car emptied out at Napoli Centrale and stayed empty through the remaining 2 hours, despite stopping at several suburban stops between Napoli Centrale and Roma Termini. I was surprised by how rural this stretch was, given its proximity to two of Italy’s largest cities. There were vast fields of hay and corn, acres of hoop houses and vineyards, with small villages and houses climbing the hillsides all the way into Rome.

Our Roma lodging was in a tiny flat, 4 floors up, with one of those only-for-skinny-people and you-must-close-the-doors-all-the-way elevators. The flat was functional and comfortable enough for sleeping, but not equipped with space to spend any time hanging out inside. It’s principal virtue was its location: in central Rome, 15 minutes walk from Roma Termini. Since the plan for 2 of our our next 3 days in Rome involved trains to Napoli, the flat’s location was ideal.