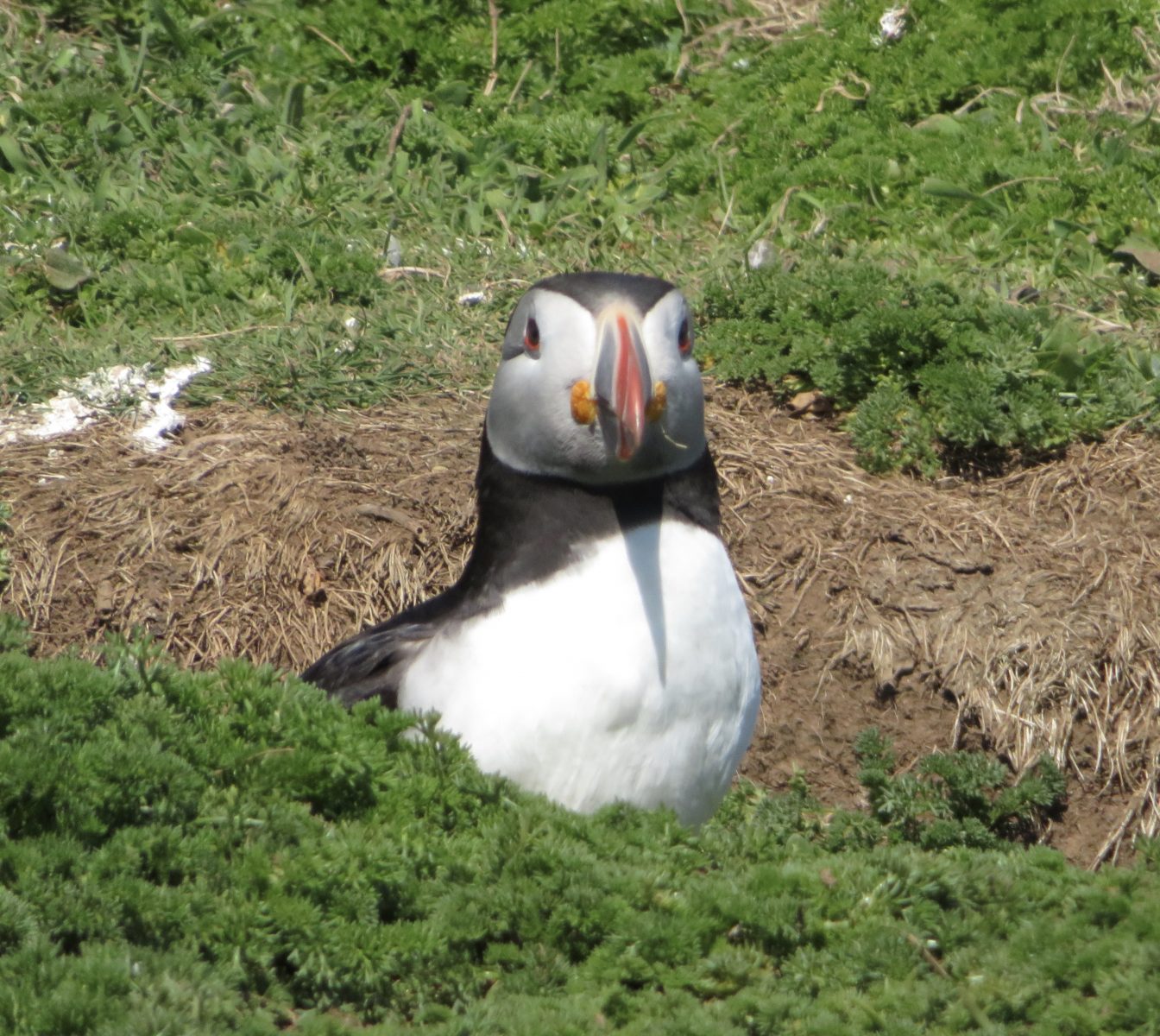 Skomer Island is renowned for its vast populations of breeding seabirds: huge breeding colonies of gulls (including Great and Lesser Blackbacked gulls); (12,000 breeding pairs of Razorbills; 100,000 pairs of Guillemots; and 300,000+ pairs of Manx Shearwaters (which you never see because they are all offshore in daylight, staying out of range of the Great Blackback Gull who chomp the Shearwaters as soon as they land.) Skomer also hosts a number of songbirds (including the lovely songful Wheatear) and breeding pairs of Oystercatchers, Cloughs and Short-eared Owls – all of which we saw, much to our amazement and delight. It was a marvelous day for birding.

But let’s be clear – the real attraction is the Puffins

…22,000 breeding pairs (half the global population) who return to Skomer each year. Skomer’s puffins are comical, extremely photogenic and not at all shy, so this post suffers from an overdose of puffin pictures. Deal with it.

The day began, as all Broad Haven days begin, on the beach.

We arrived at Martin’s Haven (departure point for Skomer) in time to book seats on the 11:30 am boat. That gave us time to explore Wooltack Point before departure.

Yes, even here, there be cows.

Here’s where the bluebells come in – so many fields of bluebells that the island often looks blue. The little blobs just past the bluebells are puffins.

Puffins and shearwaters are ground-nesting birds, with burrows everywhere. Visitors are strictly limited to the path, with no side-stepping onto grassy edges lest one crush a burrow.

Here’s where the bunnies come in. Medieval farmers introduced rabbits to the island for hunting. Since rabbits graze on everything except brambles (blackberries to us) they have totally transformed the island’s vegetated landscape.

Bunnies are everywhere – along with their burrows, which the puffins and shearwaters happily confiscate. I asked a warden what keeps the rabbit population in check. The answer: great blackbacked gulls. She saw a gull grab an adult abbit from the ground, then perch nearby to swallow it whole. Egad – I’m still truing to wrap my head around the biological physics…

The old farmhouse is now used a visitor center and overnight accommodation for the dozen or so lucky enough to bag a spot in the previous October.

Before departing Skomer, a final round of puffin pictures – because you can’t have too many (and I have a lot).

With no pub at hand, ice cream was a lovely end to the day.