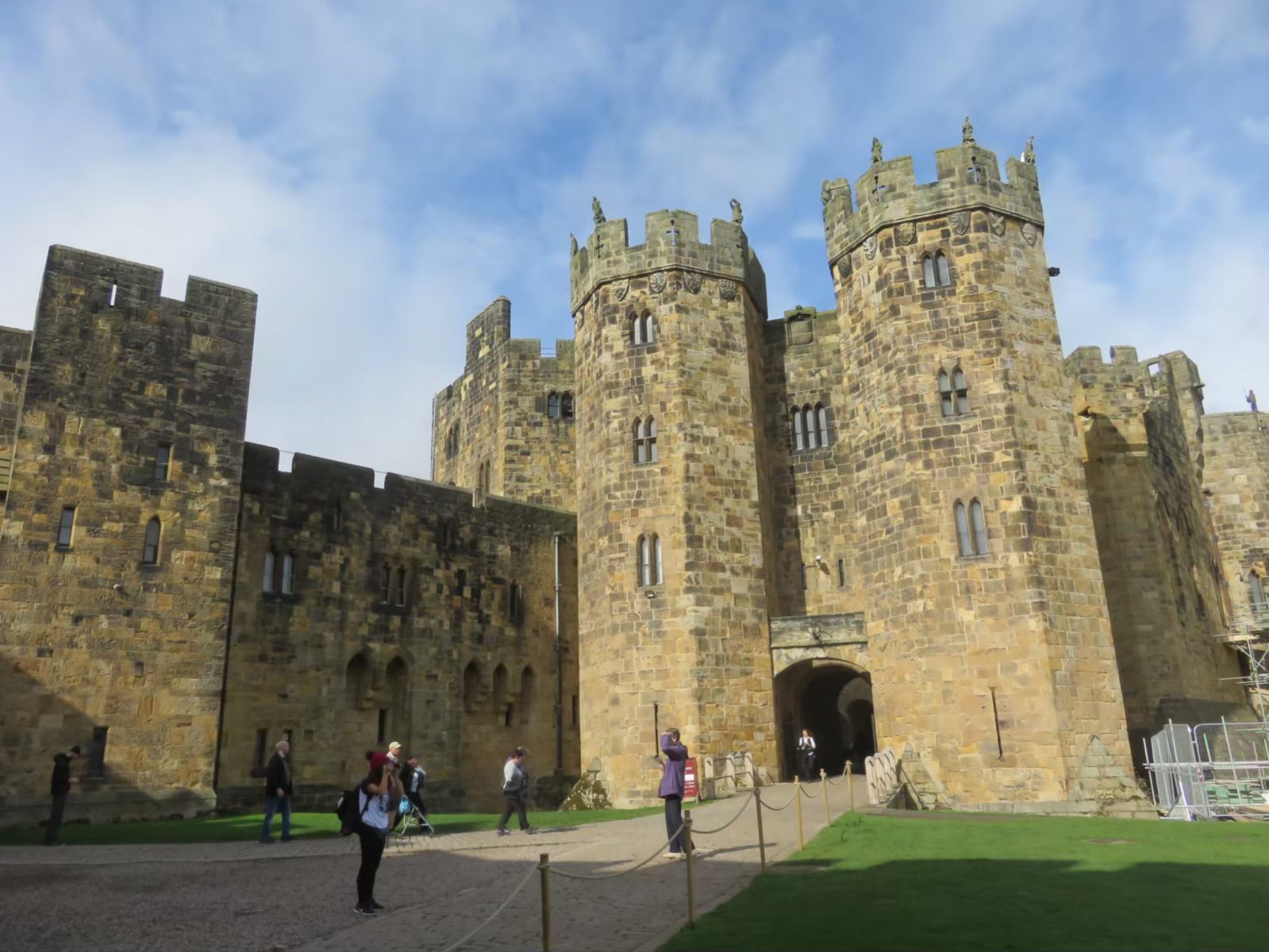 Tuesday’s bus ferried us to Alnwick Castle, seat of the Duke of Northumberland, and the The Alnwick Garden (“Anick”) a pet project of the Duchess.  We took advantage of several fun and informative tours and spent a most enjoyable day.

One of the tours focused on the many films in which Alnwick appears, including Downton Abbey’s final episode and two of the Harry Potter films. So if the photos in this blog look familiar, there is a reason.

The original stone fortification was Norman, probably built shortly after William the Conqueror’s “Harrying of the North” in 1069-70. William, you may recall, was a few generations removed from his a’Viking ancestors (now “Normans” thanks to the French trying to buy the Norse off with land) so his 1066 victory was really the final act in ~ 400 years of Norse attempts to take over England.  William needed a lot of fortified castles (held by barons loyal to him) to keep the Anglo-Saxons under his thumb and to stave off attacks by the Scots, Welsh, and other Norse intent on throwing him out – especially in the North. Hence the “Harrying” – not a lot of people left to fight with him after he razed pretty much everything to the ground.

However, that grim history is not on view in Alnwick today.  The castle was purchased by the Percy family in 1309 – the same Percys who built the 1st Norman version of Whitby Abbey in the 12th century. The Percys have managed to hang onto the castle over the ensuing seven centuries despite finding themselves on the wrong side of several battles and many court intrigues, including execution of Thomas Percy for treason in 1542. But after Thomas lost his head, the castle was uninhabited and left to molder until the 18th century. Below is an 18th century painting of the castle in its moldering state.

The inner and outer bailey (defensive fortifications) are from the original castle, as are portions of the central keep.

Below is the outer moat (and Simon, guide on our films’ tour). There’s also an inner moat which was dry but filled with spikes.

The barbican was originally the castle’s only entry. It featured three sturdy oak doors, two metal portcullis’, a pivot bridge with dry moat, various arrow slots and an open top for throwing things down on attackers. Hot sand was a favorite – very unpleasant inside chain mail.

Turning castles into stately homes was a popular 18th century aristocratic pastime, and the then Duke and Duchess of Northumberland spent a of capital “modernizing” the castle in the 1760s. They also hired Capability Brown to transform the surrounding lands into a classic “natural” English garden landscape.

The figures on top of the battlements date to about 1300 (although these figures are probably replacements). They were erected to convince would-be attackers that the castle was heavily fortified. Two men would reportedly stand on top of the towers waving large black banners behind the figures to create the illusion that there were a lot of people up there (kind of like a “flicker show” said our guide). Neville Longbottom had a close encounter with some of these figures in the childrens’ first broomstick flying lesson at Hogwarts.

Sadly, broomstick training did not occur during our visit – too few budding wizards and witches around to take the course, I suppose.

The castle was built in a very defensible position: atop a hill, with rivers around two sides. Now the Aln is “tamed” and the second river invisible, diverted underground as part of the 18th century landscape improvements. The battlements on this side were replaced with a decorative terrace.

The keep, surrounded by all those battlements, was the castle’s last stand.

There was a gravity-fed water tower in the inner bailey and a spring inside the keep.  Access to the spring used to be at ground level, but the floor was lowered in the 18th century to make room for carriages to enter.

The well/spring is visible above our heads. (That’s Isabel in red, guide on our history tour.)

The first few scenes of the clip below (departure from the castle) were shot at Alnwick, starting from the keep.

Fun bits from around the castle grounds.

The gardens were originally developed by the same 18th centuty Duke who brought in Capability Brown to do the landscapes, but they gradually declined and were derelict by the 1950s. The present gardens are just approaching their 20th birthday and are operated as a charity to raise funds for a number of worthy causes.

We learned many unsettling facts on our tour of the Poison Garden.  I knew about rhubarb and castor bean – but rosemary?  Bella Donna, a.k.a., Deadly Nightshade, got its Italian name from its cosmetic use by husband-hunting ladies using a distillation to beautify themselves.