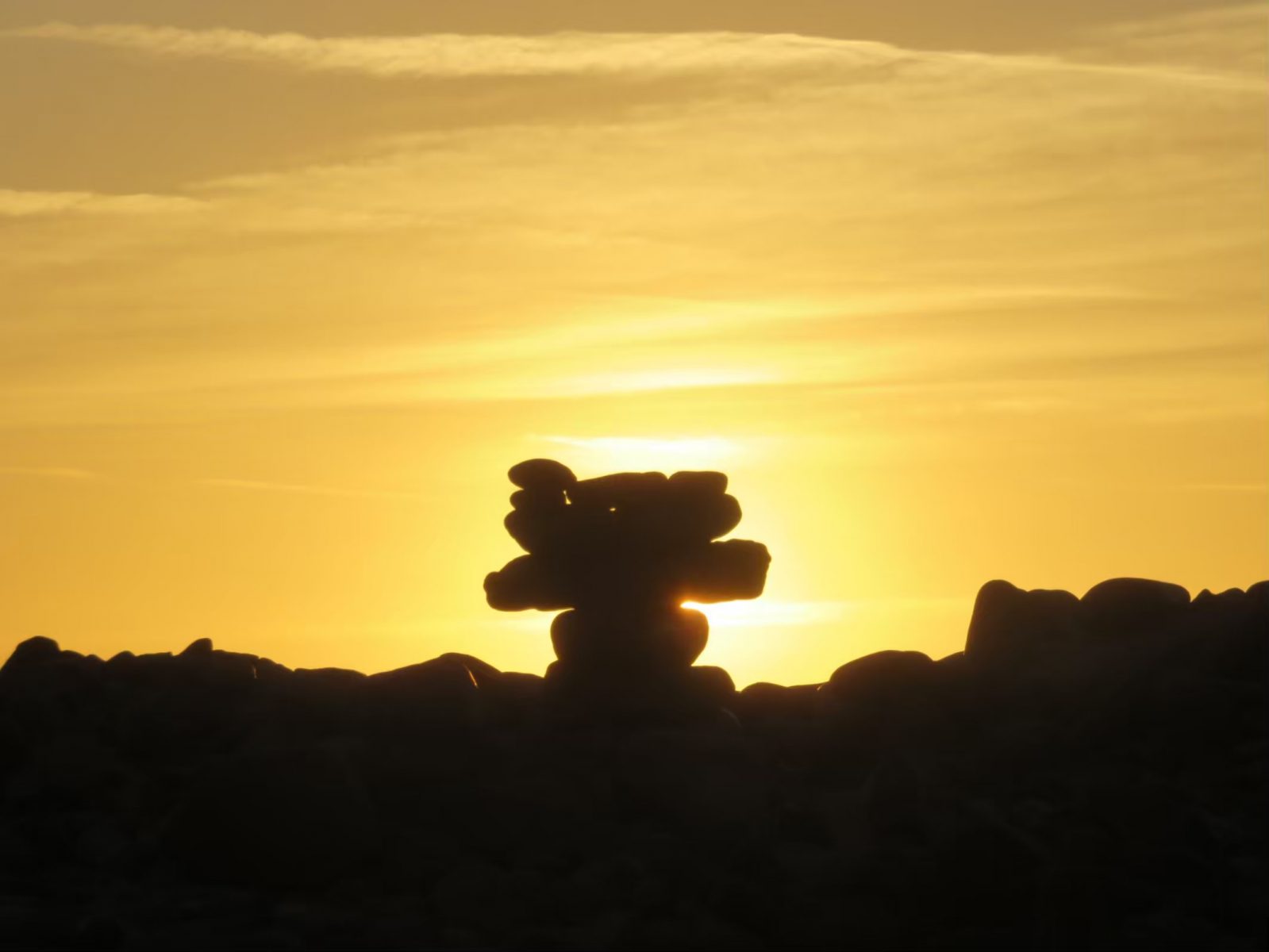 Wednesday morning was idle time, doing laundry and catching up on emails, as we waited for the tide to turn. Our destination this day was the island of Lindisfarne, largest of the Farne islands.  Lindisfarne’s priory was notoriously sacked by Norse raiders in 793, the first large scale Viking attack on a Christian church – with many more to come.  The attack on Lindisfarne is used by historians to date the beginning of the “Viking Age.”

From a plunderer’s point of view, raiding Christian places of worship made eminent sense.  Anglo Saxon Christians kept their most important treasures in churches and monasteries, making them a kind of one-stop shopping for Vikings.  One of Lindisfarne’s treasures survived: the gorgeously illustrated Lindisfarne Gospels. The book is in the British Library today (with a facsimile in the British Museum) and is considered by its Librarians to be “amongst our greatest artistic, linguistic and religious treasures.”

Given all this rich history, I was keen to visit – which turned out not to be an easy thing. The island is cut off from the mainland twice a day when the tide is in, so passage across the causeway has to be timed to the passing tides. This time of year, the causeway was closed between ~9:30 – 1:30 (hence our easy morning doing laundry).  To complicate things further, neither the connecting bus nor the mainland shuttle to the island were running.  We had hoped to travel by boat from Seahouses Harbor, but a certain hurricane on the other side of the Atlantic created winds here that kept all boats in the harbor.

Whitecaps and winds there were indeed. We bounced along topside in the double decker bus with tree branches whipping the windows Whomping Willow style.  One tree came down right across the road. The bus driver and some brave passengers cleared enough debris to let the bus get through.

Once we finally connected with our taxi, the drive to the island was a bit hair-raising. Mind you, the tide was out, but the wind was driving water back across the causeway as if the tide was coming in.

The power went out somewhere along the way (and didn’t come back until ~ 11pm), but Sean and Jackie at the Lindisfarne Hotel coped admirably, managing pots of tea, hot soup and sandwiches to keep their guests from starvation.

Sightseeing was a bit like broomstick training, so we took sanctuary within St. Mary’s church – a proper church, unlike that strange labyrinthine St. Mary’s in Whitby.  This church dates to the early 13th  century with a few older bits, and wass mercifully not gussified by the Victorians.

The Viking attack on Lindisfarne sent shockwaves through the medieval Christian world partly because the attack was so vicious and unexpected (the priory was built on an island to be safe from raids on land) but also because St. Cuthbert was buried there. Cuthbert was revered in his lifetime and miracles were attributed to him following his death. Perhaps most importantly, Alfred the Great, the Wessex king whose dreams and acts ultimately led to the creation of England, attributed his successes in battle to St. Cuthbert’s intervention.  With that kind of royal PR, St. Cuthbert became the most important saint in Northumbria.  Lindisfarne was named “Holy Island” and has been an object of Christian pilgrimage for more than 1000 years.  The chain-saw sculpture below represents monks carrying Cuthbert’s (incorrupt) body across North England and into Scotland for safekeeping.  (Cuthbert’s remain ended up in Durham in 995, prompting foundation of cathedral and town, so we haven’t heard the last of him.)

People in this part of the world have very long memories. Note this letter from the Norwegian church apologizing to the Lindisfarne parish for the Viking raid 1200 years before.

By Thursday morning the winds had calmed.  I got up with the sun to do some wandering about the island before breakfast.

Lindisfarne is also known for its castle, situated on a prominent crag formed of “whin sill,” very hard volcanic which underlies all of the cliffs and castle mounds in the area.  The castle dates to the 16th century but was turned into a beach house in 1901 – best when viewed from afar IMO.

St. Mary’s church is next door to what’s left of the Lindisfarne priory, which was re-built in Norman times.

An archeological dig underway at the priory.

Since our taxi had to return to Berwick upon Tweed anyway, we decided to travel with it and spend some time walking the city’s medieval walls. We were lucky to arrive just in time for Derek Sharman’s walking tour of Berwick town.

Berwick was the largest city in Scotland – rivaling London – in the Middle Ages. The Tweed river valley was Scotland’s breadbasket, and Berwick its most important port.

Berwick remained strategically important right through to WW2, when German plans to occupy Britain identified Berwick as Nazi headquarters.  Hold Berwick and you divide the country and can take advantage of all those lovely golden beaches so convenient for landing troops.

The Scots and the English fought over Berwick continually through the Middle Ages, with the town changing hands thirteen times.  Berwick was originally enclosed by a timber wall, which was replaced by a stone wall after England’s tricksy Edward 1st captured the town in 1296.  But Berwick’s glory lies in its Elizabethan walls, which still totally enclose the town – and are walkable for the entire length.

At the beginning of her reign, Elizabeth 1st faced existential challenges to her throne from Mary Queen of Scots and Mary’s French allies situated just three miles away across the Scottish border.  Elizabeth sunk a fortune (more than the total cost of the Spanish Armada wars) into improving the fortifications at Berwick.  She hired an experienced Italian military engineer to install state-of-the-art fortifications and weaponry.  The rampart and bastion system employed at Berwick became the standard for military forts into the early 19th century. (You can see the same design in the forts in New York harbor, including Fort Jay on Governors Islands.)

The cannons were positioned to provide cross cover, while the smaller guns (aimed across today’s car park) fired grapeshot dead ahead.

But today,  the ramparts and bastions form a delightful circular park used by hordes of walkers and providing glimpses into every side of old town Berwick.

Berwick’s three lovely bridges (two for autos and people and one for trains) spanning the Tweed.