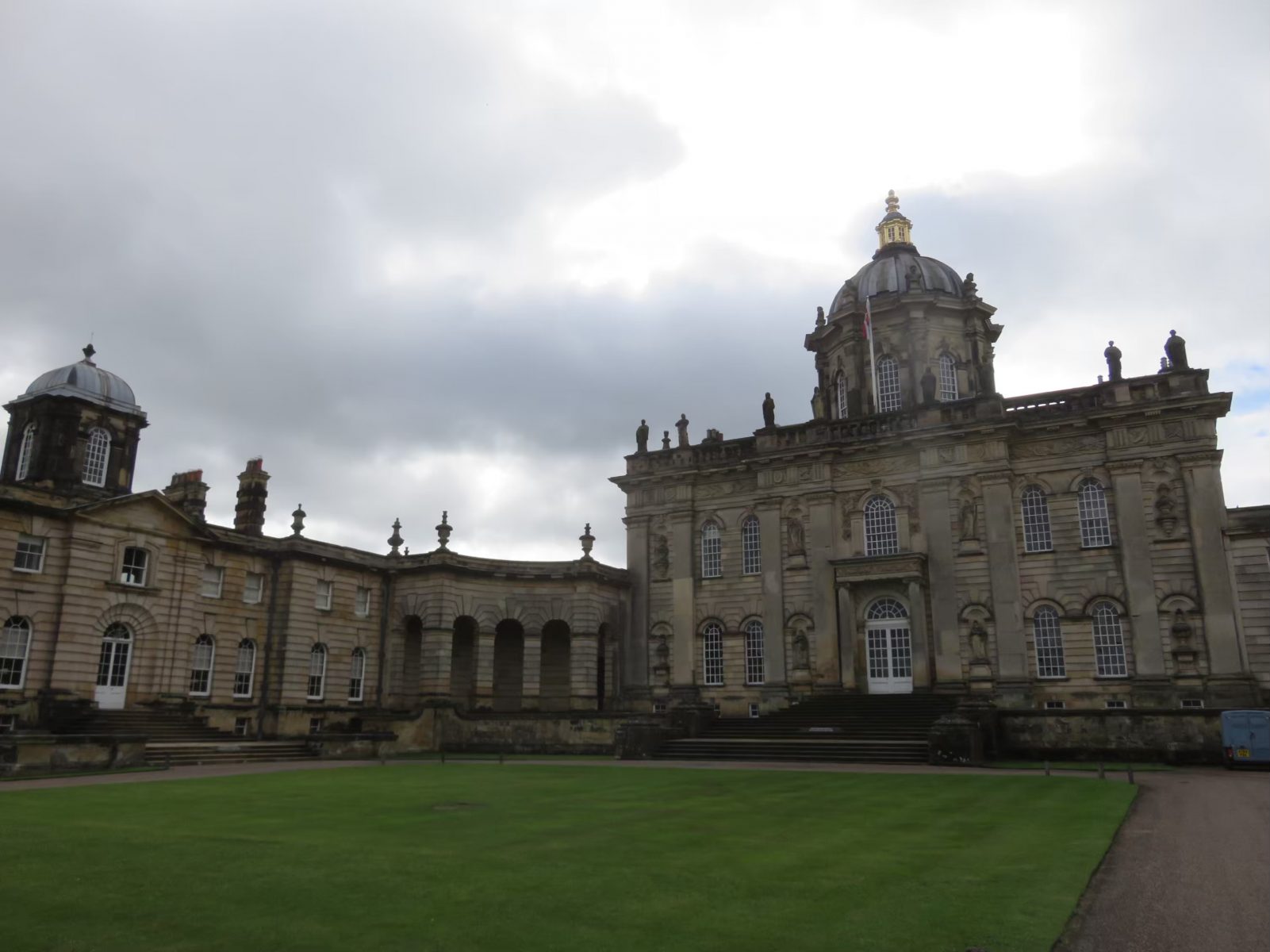 Sunday was blustery with sunny patches.  We took the train from York to Malton, then taxied to Castle Howard. (Our original plan – the 181 bus direct from York to the estate – went bust when we realized the bus didn’t run on Sundays.)

Seat of the Dukes of Norfolk, this is a grand house on a grand estate, now working hard to offer grand days out to the peasantry to help pay the bills. Fans of period drama may recognize it as the set for Brideshead Revisited (1981 TV version and 2008 re-make).

The house is a bit of a mish-mash: English baroque on the east side (e.g., let no surface be undecorated) and more soothing Palladian architecture on the west. We tagged along on an architectural tour and learned that the house was started in 1699 by the 3rd Earl of Carlisle (a nouveau riche kind of guy) and took 100 years to finish. The 4th Earl had different tastes, hence the less eye-hurting facade of the west wing.   Tudor history buffs will recognize the Howards as the family that sacrificed two daughters, Anne Boleyn and Catherine Howard, to Henry VIII’s axe in their bid for power.

The east wing caught fire in 1940, causing the (now restored)  lantern dome above the grand entry to collapse. Brideshead helped with the restoration of some rooms, but large portions of the east wing are still unrestored.  Fortunately, most of the furnishings and art were saved.

The most feather hammock was sent to the 6th Countess of Carlisle in 1854 from South America.

The 4th Earl of Carlisle made his “young aristocrat’s tour of Europe” while the looting of classical art was still legal. He shipped back a lot of Roman and Greek statuary, prettying up some of the pieces with decorative stone.

The simple and austere family chapel.

The walled garden – vegetable, kitchen, orchard and flowers all in one. And protected from the wind – a bonus on this blustery day.

The south lake is man-made: dug out, lined with local clay, then tramped by sheep driven back and forth, wearing leather boots to protect their feet.

Temple of the Winds – grand architectural folly, party house, and destination point for a stroll through the woods.

A surprisingly large garden center, with numerous opportunities to sigh over the small size of an airplane overhead compartment.

Returning to York, we walked the city wall – history and gardens, what more could one ask?

York University’s theater department was doing a Mystery Play in the park near the Minster. The plot was a mystery, but it featured an extra-large preying mantis.

Dinner at York’s oldest pub, the Royal Oak, already in use when the man-who-would-be-king (Charles II) hid in an oak tree to escape the Roundheads in 1651.