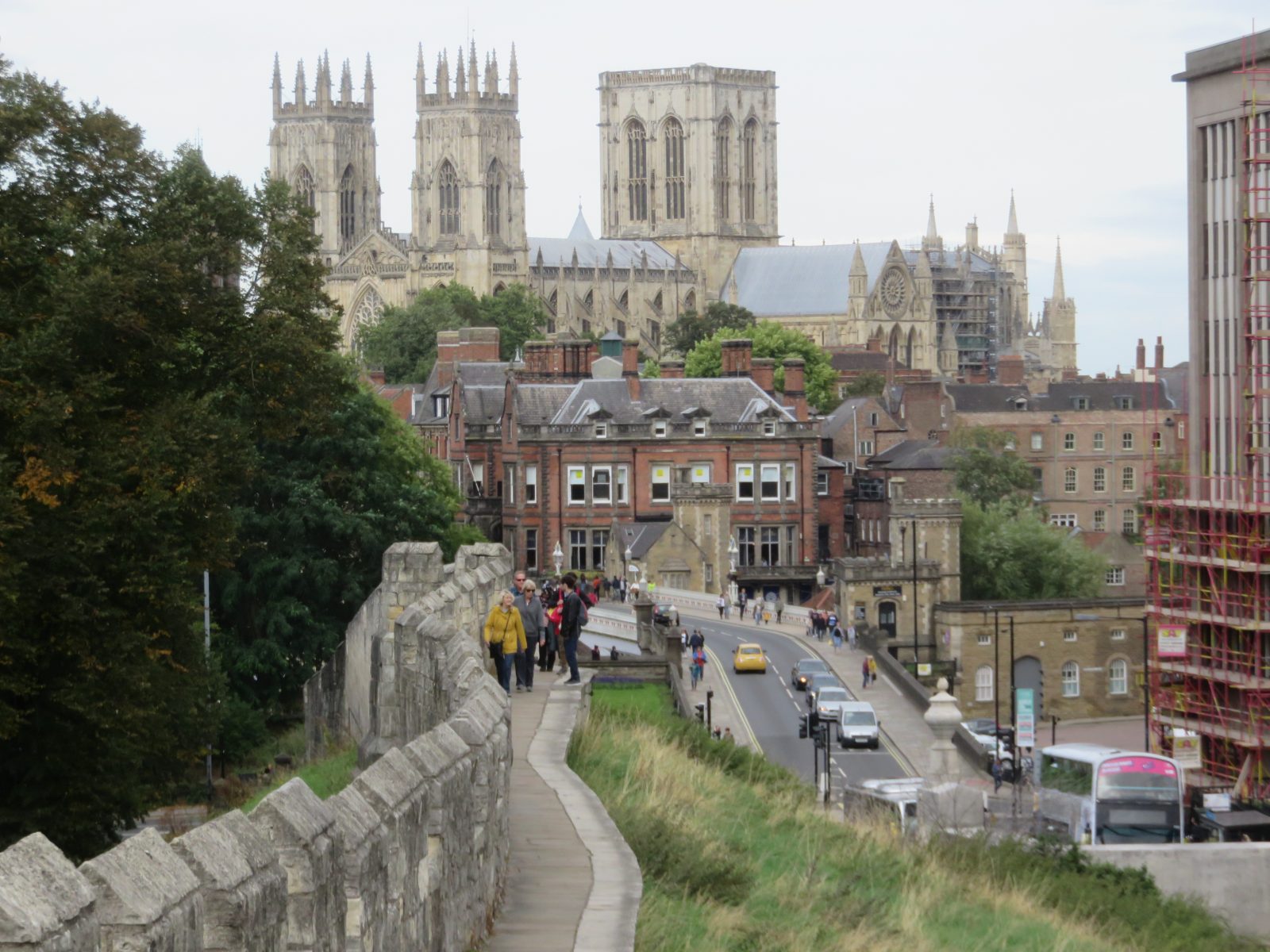 We are in York at the start of our Northeast England adventures.  Transport from Denver was uneventful for us, not so much for the lady-of-a-certain age who spent much of the trip stretched out in the mid-ships galley with an IV in her arm.  I envied her the stretched-out bit. She was lively, back in her seat and horrified to be at the center of all the fuss when the platoon of paramedics trooped on board at landing at Heathrow.

Once it was our turn to disembark, we got our 10,000 steps in winding our way to passport control (where we spent a lovely hour en queue), then hopped the Heathrow Express to Paddington and tubed our way to Kings Cross station.

Our train traveled from Kings Cross to Aberdeen, calling at York, Newcastle upon Tyne and Edinburgh En route. It was absolutely jammed with weekenders escaping the City for the relative peace of the North.

Word pictures along the way:

Three gently decaying canal boats anchored at a quiet backwater at Huntingdon, decktop pot gardens oozing on to the canal-side verge. Necklace of pools tricked out for fishers (or those inclined to waterside musing) just next door.  Villages of dun and rust colored brick.  Purple butterfly bushes gone wild blooming beside the train tracks. Slanted light against a purpling sky as the rains rose up to meet us.  Copses and hedgerows, long lanes of meadow staked out for horses, crows and sheep keeping company in the stubbled fields

We’re staying off the beaten path, in a labyrinth of yellow-brick flats, mews and walk-ups tucked into and industrial zone beside the Railway Museum. We’ve only gotten lost once so far navigating past the many, many identical  facades.

A somewhat  jet-lagged saunter took us past the library-cum-archives and the Minster, and eventually through the door of Drakes, a superb chippie on Low Petergate.  The provenance of cod and potatoes was proudly displayed on a chalk board above the timber frame fireplace mantle (now doubling as an alcove for the puddings chiller). We did not avail ourselves of the pensioners’ menu.

Saturday was a day for ducks. It drizzled, then rained, then gushed enough to leave puddles suitable for splashing at intersections. (Better than our last visit, when the Ouse was over its banks and flooding.)  Late breakfast at Wheldrakes  then an amble through the Shambles (once a butchery, now mostly cafes and high end shopping) towards the Jorvik Viking center.  Not willing to brave the Jorvik queue, we ducked into the pastry shop across the street instead.

York’s once formidable castle was reduced in the 17th century to a its keep, now called Clifford’s Tower.

York Castle is notorious for a pogrom resulting in the entire Jewish  population’s mass suicide in the tower in 1190. Richard the Lionheart was reportedly furious because he needed Jews to pay for his Crusade.

Back at the York Minster, we visited the crypt and the undercroft, both new to us. The crypt contains the coffin of Saint William, Archbishop of York and a contemporary of Thomas Becket, Archbishop of Canterbury. Following Becket’s murder and immediate elevation to sainthood, York needed something to compete for pilgrims, so they got William elevated to sainthood. (The Archbishops of York and Canterbury had a long standing feud over primacy within the church. Canterbury won.)

In the last 1960’s the cathedral was in danger of collapse as the foundations were sinking. Years of work by engineers and archeologists saved the building and revealed that a large Roman fortress once stood on this site (c. 100-300 CE). The undercroft tells this story as visitors wind their way amidst ancient foundation stones, modern steel bolts and brackets and archeological bits and bobs.  Very well done, indeed.

The Minster’s east window was under reconstruction last time we visited, now cleaned and restored to its former glory.

The Minster’s astronomical clock, a memorial to WW2 RAF pilots who died defending the Yorkshire Coast. The sky is represented as seen from an aircraft flying overhead, wit the horizon at the bottom.

The Chapter House is my favorite.

We stayed for Evensong, always an uplifting experience.  This service was a special one, as new choristers (around 7 years old) were being inducted into the choir. The little girls were SO excited – and so very composed. A music school has been associated with the Minster since the 7th century. The choir’s voices rising out of sight the ambulatory could very well have been a chorus of angels.

Traditional English pies (steak and kidney for Matt, chicken & mushroom for me) at the Black Swan Inn to end the day.

Leave a Reply to Steve U Cancel reply