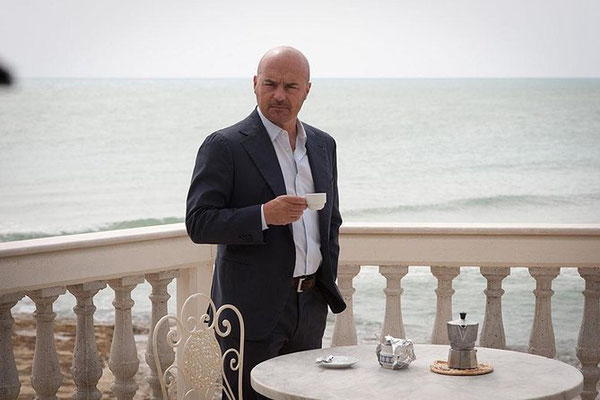 On Thursday we visited Modica and Scicli, two of the Baroque Triangle hill towns, then drove down to the coast to visit Ragusa di Marina and la casa di Commissario Montalbano.

Modica is more urban than Ragusa Ibla, with its center in the valley between two large hills. Not the very tall bridge in the background.

We strolled the main commercial street, Corso Umberto I, admiring palaces, another cathedral to San Giorgio, more grotesques, and the dramatic setting in general

We climbed many, many steps (a theme to our days here) to reach the Castello di Conti (Castle of the Counts).

There is evidence of habitation on this ridge since the Bronze Age. The Romans fortified the site, and the Normans turned it into the kind of castle familar to us from their many strongholds across England and France in the 12th century. The 1693 earthquake damaged a lot of the structure, and the parts still standing were used as a law court and prison. In the 19th century, an order of nuns set up an orphanage here, which operated until 1975. Today, the restored bits serve as a cross-cultural center.

We descended to the Duomo and crossed the street to access the primary reason for our visit to Modica: chocolate. This area is renowned for its “Aztec chocolate,” which is quite different from the Swiss-based formula we all know and love. Modica chocolate is dense and bitter, flavored with unusual additions like citrus and vanilla. Antica Dolceria Bonajuto is the original chocolate shop in town.

Having completed our mission (from which some of you may benefit), we made the relatively sort drive to Scicli.

Scicli’s setting is even more dramatic than Modica’s, including a long history of cave dwellings. Here we strolled along the Via Pennna, through Piazza Italia and past the church of San Matteo.

We grabbed lunch in a sandwich/salad shop operating from a converted garage.

Then stuck our noses into the exquisite little church of San Giovanni Evangelista, decorated in pastel blues. Rick Steves described this as being inside a Faberge egg.

Sadly, the church of Madre di Santiago de Loyola wsa closed, so we were unable to see the statue of the Virgin May is her form as Xena, warrior princess, tribute to her successful intervention in a battle long ago. This clip from the web will have to suffice.

We walked to the canyon end of town and (you guessed it) climbed to the semi-abandoned community of cliff houses, Chuiafura.

There we found a tiny private museum, operated by an elderly gentleman who grew up in this cave home – part of a family of eight.

Then it was back down the hill to find the car and make our pilgimage to Montalbano.

So what is all this Montalbano stuff? Ah, you sad un-initiate. If you were Italian – or among the American conosceti – you would immediately recognize this warm-hearted, grumpy, funny, old-fashioned Sicilian police detective. Salvo Montalbano is fictional, but more real than many public figures we read about today. He was created by Andrea Camilleri, best selling Italian author and long-time cinema director.

I’ve read the books in English translation (thank you, Boulder Public Library) and they are a delightful blend of character, plot and cultural immersion into the complexity that is Sicily. Twenty years ago, RAI (Italian national public TV) began dramatizing the Montalbano stories, creating two or three full length feature films each year with the same cast over all that time. They were beautifully filmed in southeastern Sicily, based around Ragusa and Scicli, and the films are credited with bringing tourism – and economic revitalization – to this then desperately poor part of Sicily. They are among the best public television series we have ever seen. You can stream all 37 films in the US from MhZ Choice.

Camilleri grew up in Porto Embarcadero, just west of Agrigento, and his fictional town of Vigata is located in that area.  The entrance to the commissiariat (police station) headed by Montalbano was originally filmed next to the Duomo San Giorgio in Ragusa Ibla, and his favorite restaurant, Calogero’s, was filmed in Trattoria La Rustica.

The headquarters for commissioner of police is set in the municipal building in Modica, and its tall, tall bridge features  prominently in the gorgeous flyover that begins each episode.

Vigata harbor is filmed at Marina di Ragusa, and Montalbano’s lovely home seaside home is right on the beach at Punta Secca.

We parked in the tiny Punta Secca square and joined a throng of pilgrims bent on photographing la casa of our dreams, to find it….covered in scaffolding.

Molto divertemente! We can add this to our extensive collection of “scaffolding of Europe.”