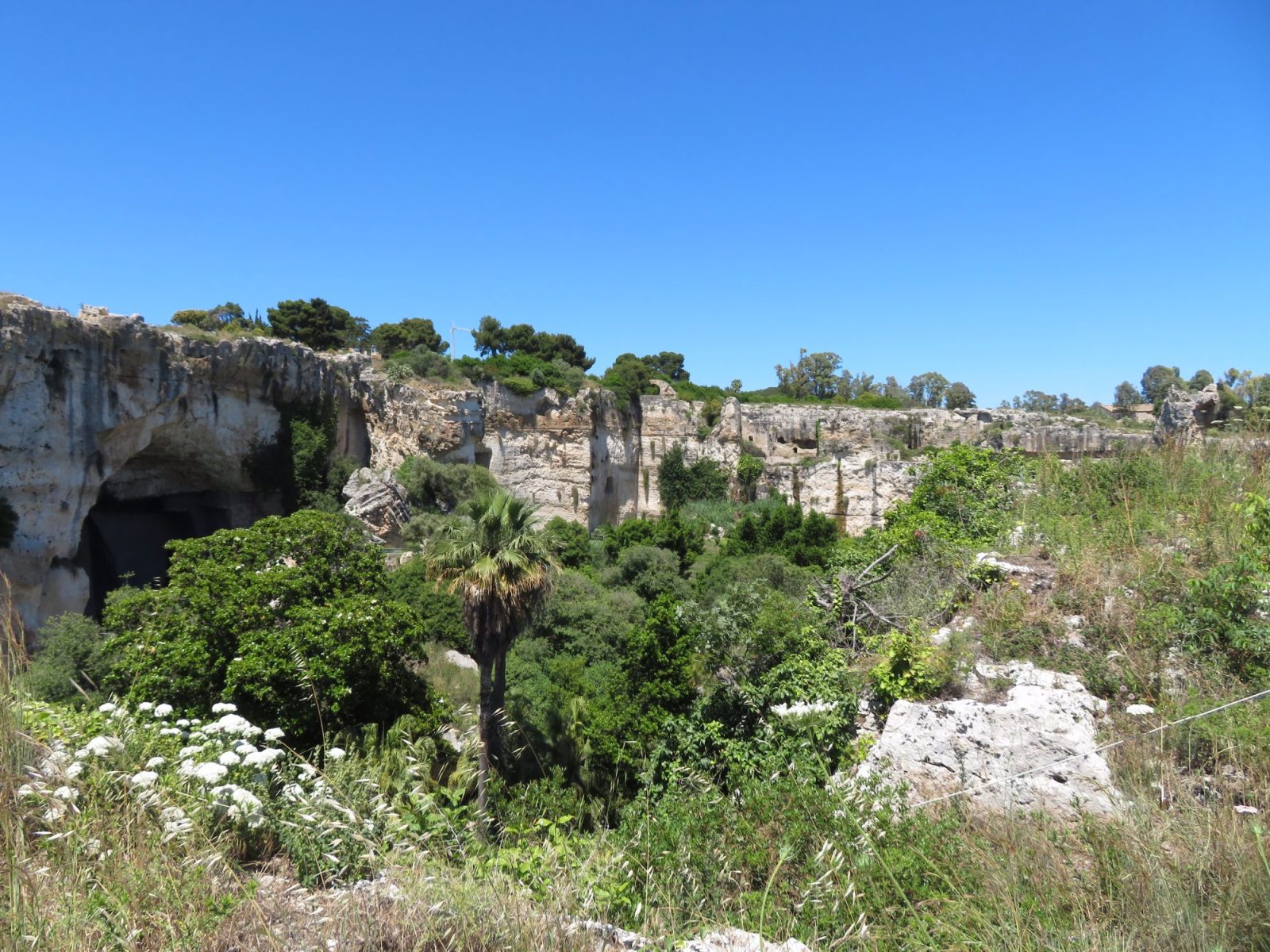 On Friday we made the long drive to Siracusa, one of Sicily’s oldest cities, nestled in a long bay on the coast of the Ionioan Sea.

The drive was lovely, up and down rolling hills dotted with olive and pine trees, green meadows, and flattish fields of winter wheat being harvested. At lower elevations, roadway verges were a glorious tapestry of pink valerian, orange poppies, yellow meadow marigolds and prickly pear cactus. At higher elevations, the landscape changed to rocky outcrops and decidous trees. No pictures, because of the navigation thing.

The main attractions in Siracusa are a Greek Theater (plus associated ruins, caves/quarry and museum), an ancient catacomb, and strolls around the “charming” island of Ortigia. Michelin gives Siracusa 3 stars and – gotta say – we didn’t feel the vibe. Siracusa is a big, crowded city with ugly, modern buildings and not-exciting antiquities. But you can decide for yourself…

We found our targeted parking lot on only the second pass and walked up the Corso Gelone and Vale Teracenti to locate the Catacombs of San Giovanni.

The church of San Giovanni stands over the crypt of an early Christian martyr, St. Marcian. The saint’s burial place was equipped with a peephole for worshipers to see the body and pass a cloth over the entrance to create a relic.  The church was destroyed by the Arabs, restored by the Normans, then destroyed again by an earthquake. It is still consecrated space and used for weddings and outdoor mass in the summertime.

In Roman Christian times, this area was reserved for cemeteries, with graves chiseled out of the rock. Because this is very hard limestone, with little danger of collapsing, the cemetery expanded to become a large, interconnected complex of grottoes extending for several acres beneath and beyond the church. The area was used from the 4th to 6th centuries CE, and bones were still present until WW2, when they were removed and buried elsewhere to allow use of the catacombs as an air raid shelter. Pictures aren’t allowed inside the catacombs, so here’s a pic of a poster illustrating what is below.

Access is through guided tours, presumably to prevent benighted visitors from taking up permanent residence. This is our guide, showing the layout of the catacombs. Hard hats and masks were the fashion of the day.

Some of the grottoes extend back at least a hundred feet, hosting multiple generations of the same family. There are also chapels and beautiful Christian frescoes still retaining their color and form.  One interesting tidbit was the practice of burying special people (saints and martyrs) in a manner that would allow them to be nourished in the afterlife. Three holes were drilled in the stone slab covering the grave, then connected to a copper tube that ran to the corpse’s mouth. Wine, milk and honey were dribbled through the holes on family visits and holy days.  The pictures below are of artifacts from the Catacombs, now housed in the nearby museum.

One mammoth sarcophogus survived in the Catacombs and is now housed in the museum.  Stories from the life of Jesus surround the deceased.

Emerging unscathed from the underworld, we made our way around the corner to the Museo Archaeologico Regionale di Paolo Orso.

The museum’s garden entry was lovely, featuring bougainvillea hedges and rhodedendron bushes pruned into tree shapes.  The museum houses finds from archeological expeditions conducted throughout the Siracusa region and beyond, focusing on prehistory through the Greco-Roman period.  Mostly, the museum has pots – thousands and thousands of pots, and potsherds (pieces of pots).  I found myself wondering if the museum had any magazine storage, since artifacts of every quality seemed to be out on display. Below are snaps of artifacts I found interesting (including some pots).

Sicily once had an abundance of megafauna like big cats, hippos and elephants. Because it is an island, with relatively limited resources, megafauna like elephants evolved to become dwarf megafauna over time. Some believe that the skeleton of the dwarf elephant on the left gave rise to the myth of Cyclops, the giant with one (or three) eyes.

An assortment of proto-historic pots, mostly from funerary offerings, created by the tribes who lived in Sicily before the Greeks arrived.

So much for il museo.  We backtracked past the Catacombs to find the Parco Archeologico della Neapolis, containing Greek and Roman ruins and an ancient quarry from which much of the stone was cut.

The quarry was the best part of the archeological park IMO. Stones were cut by slaves and prisoners of war to build the Greek city of Siracusa. The scale of the operation was immense – imagine those benighted souls chiseling hard limestone more than 100 feet deep.

In later times, the valley was planted with orange trees, and the scent of orange blossoms perfumed the air as we walked. The shade was also welcome, since it was a very hot day.

As an aside, it was snowing back home in Boulder.

The most famous cave is called the Ear of Dionisius, presumably for its acoustic properties.

Leaving the quarry, we headed north-east to see the main event: the Teatro Greco, an ancient Greek theater.

Performances of Greek plays are performed in the theater for a few weeks every summer, including the time that we visited. As a result, the ancient theater’s seats were covered with modern wooden bleachers, plus a modern stage and lighting stands all around – kind of detracts from the sense of antiquity (she says with irony).

Exiting the Parco, we caught a taxi for our next adventure, a stroll around the little island of Ortigia, which thrusts out into the bay. Michelin and Rick Steves wax ecstatic about Ortigia. After the drama of the Baroque Triangle hill towns, we found Ortigia to be rather ho-hum.

We strolled along the Via Cavour…

…and visited the Siracusa Duomo, which is built on the site of a Greek Temple, incorporating some Greek columns into its walls.

Walking through the Piazza Duomo, we came to the Fountain of Arethusa (fountain of the ducks, to the locals) located at the tip of the island. We were joined by inevitable gang of school-age kids exploring their heritage on end-of-term field trips.

Ending our walk with some enjoyable moments by the sea, we turned around and headed back into busy modern Siracusa, where we found our parking lot (after only 3 wrong turns) and headed back to lovely Ragusa Ibla.