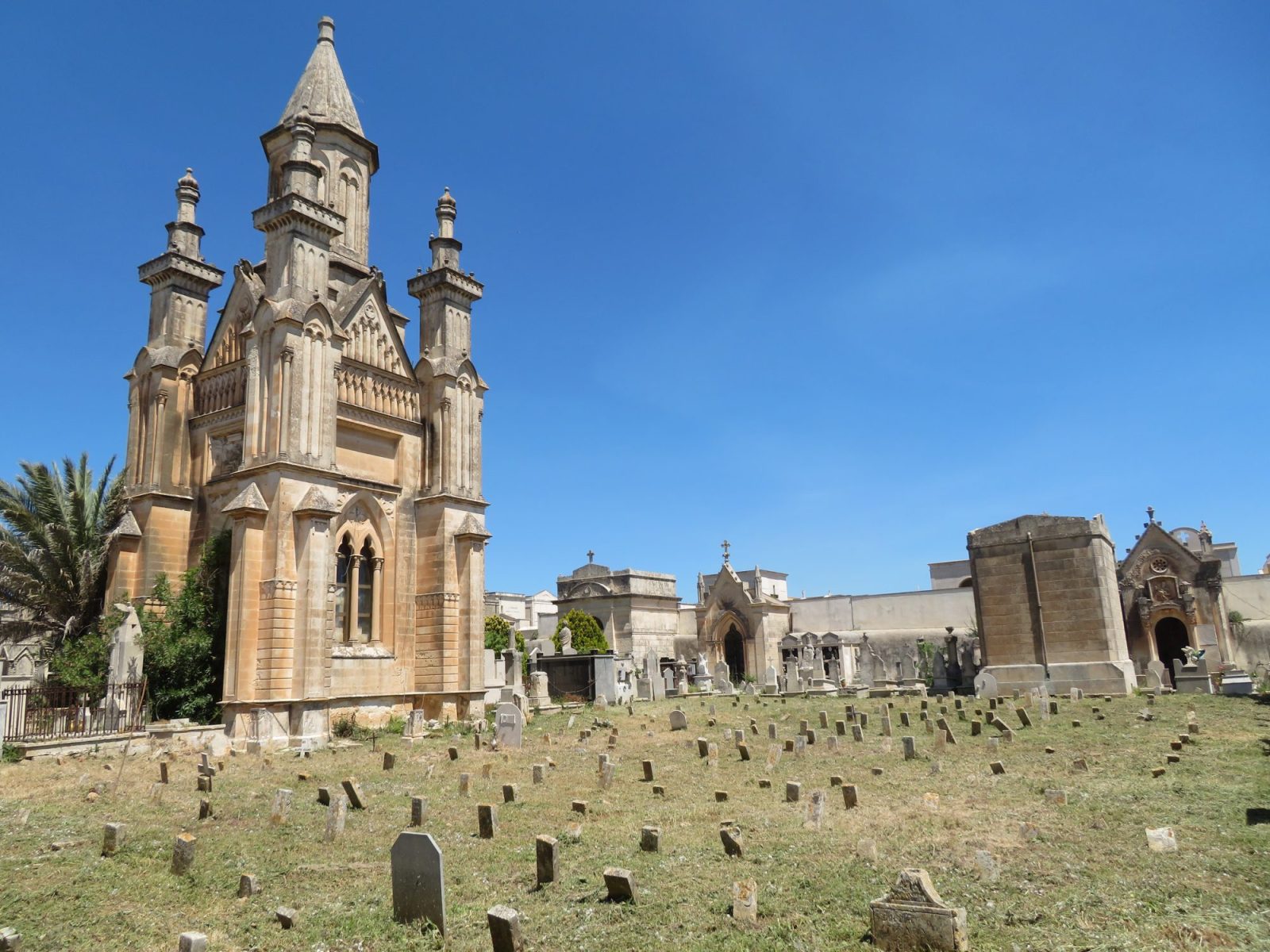 On Saturday we drove higher up into the Iblei Mountains to visit the little town from which my paternal grandparents emigrated 100 years ago, then visited Noto as we looped back to base.  It was our second drive through rolling hills mostly terraced by stacked-stone walls, many tumbling into ruins.

My paternal grandfather, Salvatore Buccheri, left his home town of Canicattini Bagni in 1921, sailing from Naples to New York to look for work. He was 18 years old and left behind his 16 year old wife, Paola Bianca, and his 3 month old son, my father Angelino Paolo Buccheri. Paola and Angelino lived with Salvatore’s mother, Angela Gennaro, for six years, then emigrated to the US in 1928. That’s pretty much the sum of what I know about these ancestors – I never met these grandparents, and met my biological father only once.

Canicatti Bagni is a typical little Sicilian town with 2 story shops on the main drag and rows of multi-story flats in the newer areas. A Sicilian geneologist, Fabio Cabrile, is helping me track down details of the family history. He found the address that my grandmother, Paola Bianca, lived in when she was born, and he located three graves in the Canicattint Bagni cemetery. We began with the address.

Via Pignati is at the edge of town and only one block long. Most buildings on the street are modernized or new, but 3 houses at the far end of the street date from the era when my grandmother lived here.

Leaving Via Pignati, we wormed our way through narrow lanes to reach the cemetery, located on the northeast side of town.

This is a very large and elegant cimitero, which is lovingly maintained and clearly gets lots of regular visitors.

On Fabio’s advice, we searched out the cemetery custodians and asked their help in finding the graves of the grandfather (Vincenzo Bianca, died 1911) and father (Sebastiano Bianca, died 1933) of my grandmother Paola Bianca, and the grave of my grandmother Angela Gennaro (died 1933), mother of Salvatore Buccheri. The caretakers, a genial and courteous duo, had no English, so we relied on my pitiful Italian and a lot of hand gestures to communicate. They pulled out dusty folders filled with tattered pages and searched for quite some time.

Finally, after indicating that these people were buried “in the earth,” we went on the hunt for graves. We passed through dozens of imposing monuments to arrive at…the earth – essentially, the pauper’s field.

Well, OK, then. I suspect that these relatives were among the poorest of the poor, with emigration their best route out of poverty. Fabio tells me that almost all of people in these families left Canicattini Bagni for Latin Ameica, England and the USA. I try to imagine how desperate they must have been, to leave family behind – in a culture where family is everything – seekeing better fortune in an unknown place. With copious thanks to the custodian, and having paid what respects we could, we left Canicattini Bagni ourselves to try our luck in Noto.

Our targeted parking lot was closed, so we circled around town and ended up in what seemed to be the overflow lot for sports events.

Tour books rave over the architectural symetry of Noto, which was rebuilt after the 1693 earthquake to an actual plan. (How very UnSicilianio.)  Streets are on a grid and the public part of town was built like a “stage set,” with the same mellow stone and streetscapes built to enhance perspective.

The dome of this cathedral collapsed in 1996 due to lack of maintenance (are we listening, Boulder ciitizens?), triggering an outcry for historic opreservation.

We had a delicious tuna salad lunch at Sabbinirica, a slow food cafe.

Fortunately, there is also gelato, for which Noto is reknowned. We tried Caffe Costanzo, just off the Piazza Municipio, which is rated best of the best. We concur.

4 thoughts on “Noto and the search for ancestors (mine)”