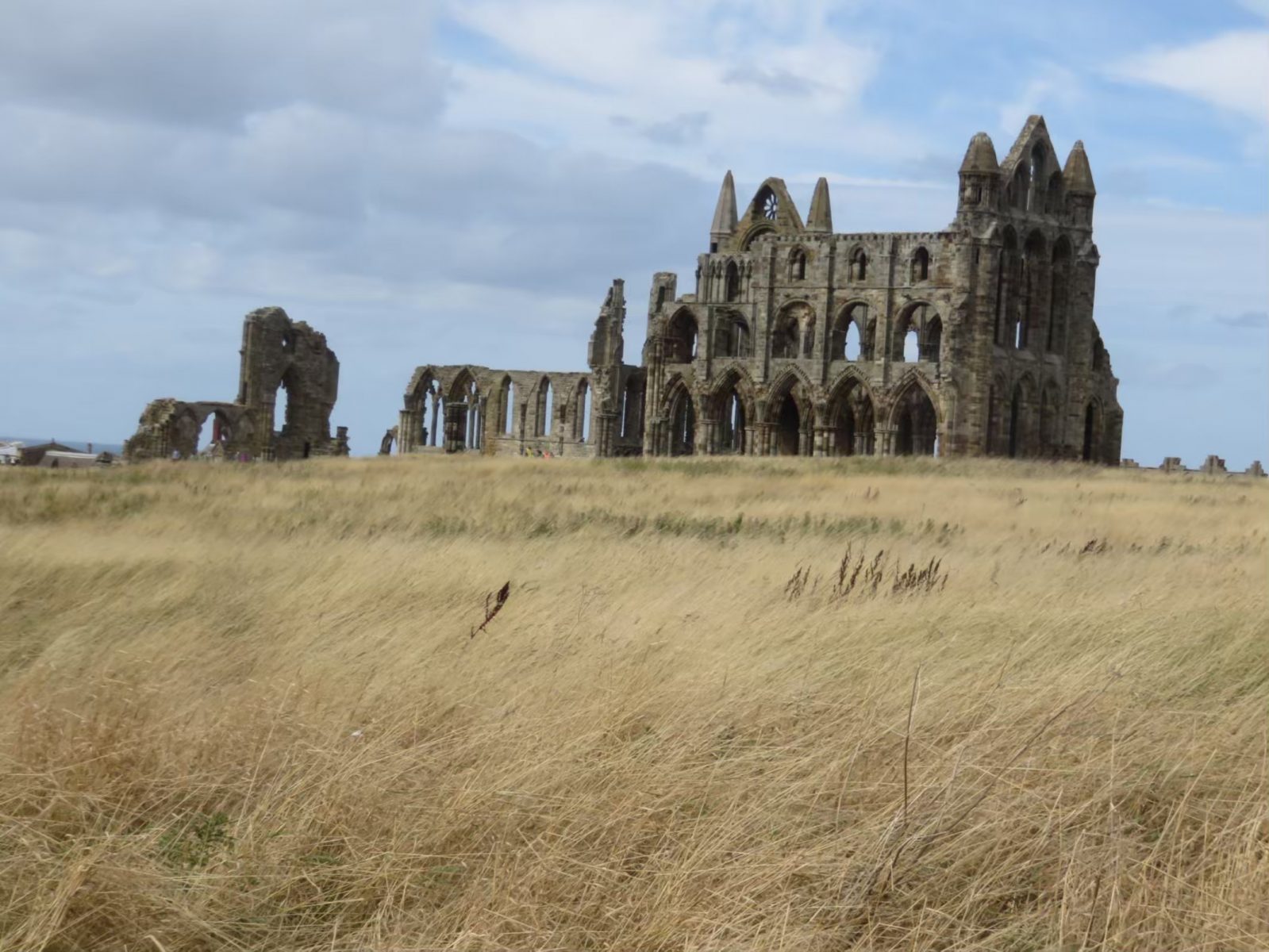 On Tuesday we doddered around Whitby with the pensioners. (I remember the days when we used to stand out as young fry when traveling Britain in September- now we fit right in.). After sorting out options for our Saturday multi-leg train journey north (two legs being caught up in an “industrial action” aka “strike”) and the mis-information we had about buses (local buses having been suddenly cancelled due to UK’s austerity measures), we trusted to shank’s mare (our feet) and headed down the harbor.

Dogs  were almost as prevalent as pensioners

The Esk divides Whitby’s harbor into West Cliff (where our flat is located) and East Cliff (site of the former abbey) with a pair of lighthouses on each side.  One crosses the harbor on a swing bridge (about which more later).  The tide was out, revealing the perilous reef that boats must navigate to enter the harbor (and, if you were going a’Viking, to sail up the river  on a voyage of conquest. Whitby is a Norse name (whitburgh, or “white stoned fortified place”) dating from a 10th century Norse settlement at the harbor.

We picked up fresh crab sandwiches on the east side and made our way up the infamous 199 stairs to the churchyard of St. Mary’s church. Why are the steps infamous? Because Dracula, in the shape of a large black dog, bounded up these stairs after his schooner wrecked on the Tate Hill Sands below.  From this graveyard, he preyed on innocent young Lucy Westenra, luring her to the grave he (temporarily) occupied so he could to sink his fangs into her ivory throat.

Bram Stoker stayed in Whitby many times between 1890 to 1896.  He wrote in the reading room of West Cliff’s  Royal Hotel, which has with stunning views of the abbey directly across on the other side.  On an early visit, a Russian ship called Demeter, carrying boxes of silver sand, wrecked in the Whitby harbor during a storm.   Stoker hung out on the pier with sailors, picking up their tales of the supernatural: a black dog whose howl is a death notice and a  black carriage drawn by black horses which comes to collect the bodies of recently buried sailors to take them back to the sea. And he checked out a book at the Whitby public library where he lured of a Transylvanian nobleman called son of the devil – Dracula.

We are all about Dracula in Whitby.

Fictional (?) vampires aside, Whitby Abbey has an illustrious history. The first abbey was established in 657 by Hild, a daughter of the Northumbrian royal family. The Anglian abbey was a cultured and powerful community with international links; it lasted for a couple hundred years before it was abandoned in the face of frequent Viking raids.  It was a mixed community: men and women, under the leadership of an Abbess.  Whitby was the location of the 664 synod, where an agreement was made to follow the Roman church rather than the Celtic one – which, among other “reforms,” eventually took women out of the leadership picture.  IMO, the best part of the Abbey audio tour was the voice of  Aelfflaed, Hild’s protégé and 3rd Abbess, commenting rather snarkily on the political ambitions of her male successors.  Archeologists have uncovered a few traces of the original community, including these graves.

Too little is known to reconstruct the Anglian community, especially since some of it has probably fallen off the cliff into the sea. (The cliffs are eroding at a rate of 10 meters/100 years.) Here’s a reconstruction of the abbey’s 2nd and 3rd incarnations.

The ruin is from the abbey’s third incarnation, a grandiose exercise in high gothic architecture and raw political power constructed by the Benedictine order. It was completed by the end of the 12th century and dominated the area until 1539, when Henry VIII dissolved the monasteries.

The church of St. Peter and St. Hild, once 90 meters long. The placard shows a reconstruction of the interior.

The abbey and its estates were acquired by the Cholmley family, chums of Henry VIII. They dismantled the monastic buildings and used the stone to build their own noble house and estate.

The parish church of St. Mary (once the abbey church) has the strangest interior: it’s a virtual labyrinth of box pews totally filling the worship space.

The “three-tier pulpit” was probably built so the vicar could see which of his parishioners were sleeping.

Back down the steps and across the harbor, we strolled to the end of the quay (ice cream in  hand)  and climbed the east side lighthouse.

By late afternoon the tide was in and running high (6 meters).  We took advantage of a boat tour taking advantage of the tide to run upriver to Russwarp.  The swing bridge had to swing open for us to leave the harbor.  Opened in 1909, our boat operator said it’s one of the only swing bridges left in the country.

This little chap (and his speckled brother) cruised up the Esk with us.