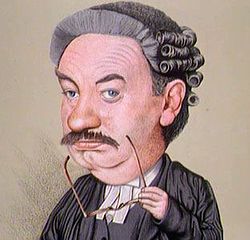 Sorry for the delay in completing my trip report. I returned home on May 23rd to a bad cold, much kerfuffle in library-land and the loss of our dear beloved Folly-dog.  I’ve wished myself back on the beach in Broad Haven many times.

We decided to spend our last day in London doing guided rambles with London Walks (whose tour guides we’ve always enjoyed). Overachievers that we are, we planned to spend the morning in Rumpole country and the afternoon with the ghost of Peter O’Toole.   Sadly, a Tube breakdown delayed the start of our Legal and Illegal London walk, making it impossible to make the rendesvous for the Old Hampstead walk. So we hung around The City (London, that is) all day, and finally rode the London Eye.

… where we disembarked for a stroll through Leicester Square (theater district), past Covent Garden (where we just missed The Queen), and on to the Holborn Tube station.

From Holborn Station, walked across Lincoln’s Inn Fields, site of many prominent executions.

The grassy lawns of Lincoln’s Inn Fields are a great draw for lunchers and picnickers – who are likely unaware that a mass grave for plague victims lies under the grass.  Plague bacteria live for centuries.

Lincoln’s Inn is the oldest of the legal institutions (part student hostel, part law school, and part legal chambers) known as the Inns of Court.  Until the reign of Henry 3rd, law was taught inside the City of London by Catholic clergy. Henry and his Pop, King John of Magna Carta fame, believed wholeheartedly in the Divine Right of Kings.  Henry came to the throne as a child and never quite got over the notion that he should always have his own way.  Lawyers being inconvenient obstacles to this view, in 1234 Henry decreed that The Law could no longer be taught within the City of London. Henry de Lacy, third Earl of Lincoln got around this decree by setting up an “inn” for law students in Holborn, just across the London boundary – or so the story goes.  Today it is the largest (and rowdiest, based on our Guide’s stories) of the four surviving Inns of Court.

Leaving the premises of The Honourable Society of Lincoln’s inn, we crossed High Holborn to view the Gray’s Inn Walks.

Gray’s is the smallest and snootiest of the Inns: the Walks are only open from 12-2pm weekdays, and the buildings are never, never, never opened to the public (much to our Guide’s chagrin).

Leaving the calm and majesty of Gray’s Inn, we headed once more across the modern bustle of High Holborn street towards Staple Inn.

Staple Inn is now a school for actuaries (insurance types).  Exams were underway the day we stood gawking at the gorgeous gardens.

Walking down Chancery Lane, we passed Ede & Ravenscroft, purveyors of barrister’s wigs and robes since 1689.

The Basic Barrister (wig on the left) will set the new grad back some $725 (plus another $200+ for robes). (I never wanted to be a trial attorney anyway.)

Judges’ gear is paid for by UK taxpayers: full kit  for a High Court Judge (robes, silks and that dashing long wig)  totals up to ~ $19,000.

Crossing Fleet Street (sadly, no longer inhabited by newsy types), we made our way into the Middle Temple – and Horace Rumpole’s stomping grounds.

The building below left was used by the TV producers as Rumpole of the Bailey’s chambers. Barristers with a sense of humor, this chambers reportedly had Horace Rumpole’s name on its list of occupants until just a few years ago.

Continuing south. we made our way to Temple Church,  built by the Knights Templar in 1185 as their London Headquarters. An organ concert was underway as we passed – I nearly ditched the tour to soak it in.

Our walking tour ended in the Middle Temple, the most open and welcoming of the Inns (according to our Guide). They have lovely gardens, which are always open for public use.  Shakespeare used red and white roses from this garden in his dramatic rendering of the breakdown in negotiations that led to the Cousins War – aka, War of the Roses as this centuries long battle has been known since performances of Shakespeare’s Henry 6th began.

Working our way back to the Strand across from the Central London County Court, we visited a most decorative loo (at least on the ladies’ side) before grabbing a sandwich and heading to the Inner Temple Gardens for lunch.

After lunch, we wandered west along the Victoria Embankment (north bank) past Blackfriar’s Pier towards the Millennial Bridge – with a brief detour north for gelato and time contemplating the lovely form of St. Pauls Cathedral.

Over on the Albert Embankment, we joined the throng and strolled east towards the London Eye.

The London Eye is a 433′ tall rotating observation platform located right in front of what used to be London City Government’s main hall (before Maggie Thatcher eliminated it). One turn of the Eye takes 30 minutes. Maggie would approve of the Eye’s free-market philosophy: fares set as high as the market will bear (REALLY expensive). But it was one of those gloriously rare clear days, so we splurged and enjoyed stunning views of the City.