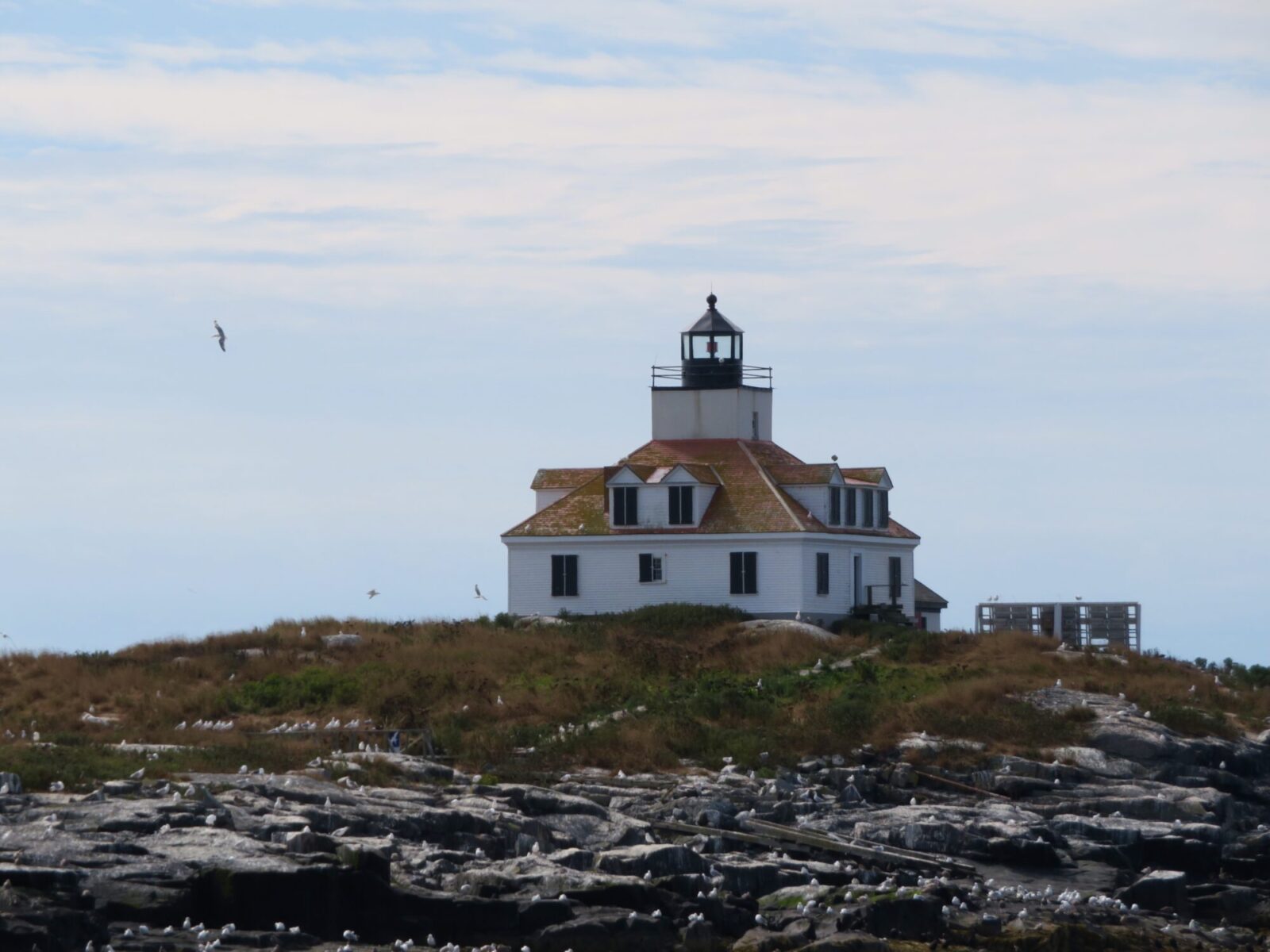 On Saturday we took a cruise – one of many, many cruises and boat rides offered out of Bar Harbor’s port. We thought the Puffin Lighthouse Cruise looked most interesting, so we plunked down (big) money for a 3 hour tour. (Not as eventful as Gilligan’s 3 hour tour, fortunately.)

The route took us out of Bar Harbor, around the point of Schoodic Head Peninsula, then 14 miles out to sea to Maine’s second tallest lighthouse, Petit Manan. We cruised into Winter Harbor on the way back before returning to Bar Harbor.

The walk from the Saltair Inn to the harbor only takes about 15 minutes. It’s a lively port, used by everything from cruise ships to lobster boats to sail boats and tourists paddling around on sea kayaks or falling off paddle boards. The giant, multi-thousand capacity tour boats have to drop anchor out in the bay and send their hordes in to flood the town on “tenders.”

We loaded on board with several dozen other passengers. Everyone was crowded together on the outside deck since it was a glorious, sunny day.

Our first lighthouse visit was to Egg Rock, easily viewable from Acadia’s coast.

Egg Rock’s whitewash (visible on the satellite image below) is testament to a thriving colony of seabirds. We saw mostly cormorants and gulls, along with one beleaguered juvenile bald eagle being give a very rough time by a seagull gang.

Past Egg Rock, we picked up speed for the trip out to sea and Petit Manan. Frankly, there wasn’t a lot to see along the way except the buoys – hundreds and hundreds of buoys – marking the location of lobster pots. In fact, there were so many lobster pots that the sea lane traveled by boats like ours was a very narrow path through a very broad bay. You can see some buoys bobbing along in the following pictures.

Given how many lobster pots we saw, and how many restaurants feature huge quantities of lobster on their menus, I got curious about how they manage to keep the species alive. (Personally, I’m no threat since I am not a lobster fan.) I did a bit of on-line research and learned that Maine’s lobsters- and its industry – are thriving thanks to conservation measures put in place several decades ago. (The warming waters predicted with climate change make the picture less rosy, unfortunately.) So here’s a brief look at the Maine lobster industry as we cruise to Petit Manan.

Petit Manan Lighthouse is now part of a wildlife refuge that stretches for 250 miles along the Maine coast. Assuming you are not a lighthouse aficionado, this island’s primary attraction for tourists is the Atlantic Puffin colony that was successfully established here in 1984 – one of only two puffin nesting locations on North America’s east coast.

The U.S. Coast Guard maintained this lighthouse until 1972. At that time, the island was home to healthy nesting populations of Arctic and common terns, thanks to active management of predator birds by the resident lighthouse keepers. When the resident keepers were removed, black-backed gulls and herring gulls – thugs of the bird world – moved in and quickly wiped out the tern colonies. In 1984, the US Fish and Wildlife Service poisoned all of the gulls. (Today, gull populations are managed by oiling the eggs to prevent hatching. Destruction of eggs didn’t work because the parents simply laid more.)

Terns reportedly returned to nesting on the island within one week of the mass gull extermination. Two pairs of puffins were introduced, and the species has since grown to over 100 nesting pairs. Sadly, August is not the time to see puffins: the little darlings spend their lives at sea, only returning to land for a few months to dig burrows and raise their chicks. By the time we cruised by, only a couple of late leaving juveniles were still in the area. But we saw lots of razorbills, guillemots and terns – none of which we really got close enough to photograph. (If you really want to see puffins, Skomer Island in Wales is the place to go.)

The return trip took us past the Winter Harbor Lighthouse and into Winter Harbor, then past Spectacle Island and along the Schoodic Peninsula to return to Bar Harbor

Winter Harbor was hosting lobster boat races when we cruised in. Those suckers could move!

Spectacle Island is a private residence available for rent…starting at $8000 per week.

Disembarking from the ship, we walked up the street for a tasty late diner-style lunch at Jordan’s Restaurant, a fixture in town since 1976.

2 thoughts on “(No) Puffin Lighthouse Cruise”