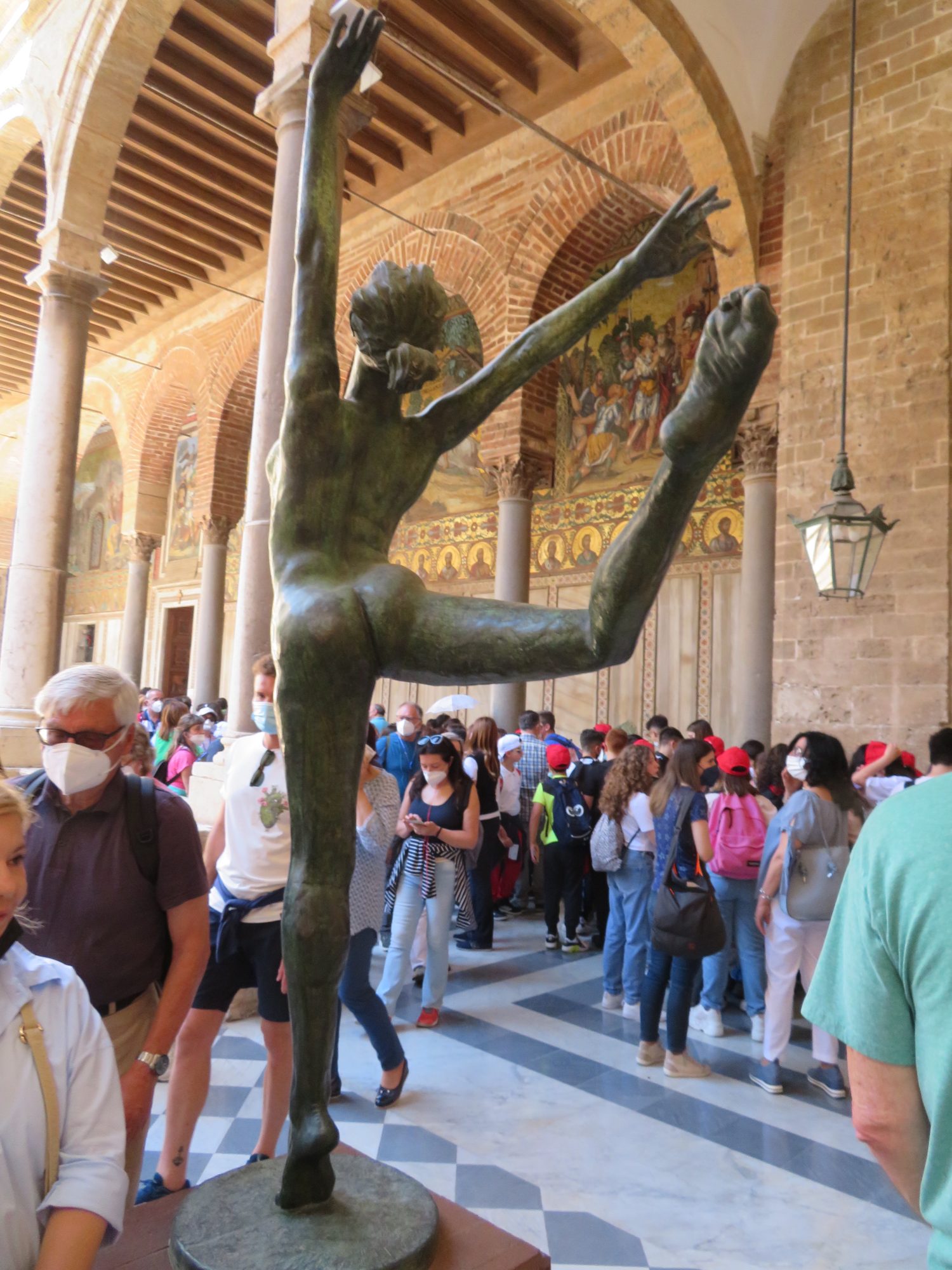 On Monday, after a nourishing breakfast of arancini (rice dumplings stuffed with stuff) and sundry pastries, we ambled back up past Teatro Massimo to the Norman Palace to see more mosaics.

Every middle schooler in Palermo was at the palace on what was apparently the designated field trip day to see both medieval splendors and the workings of Sicily’s regional parliament (now housed in the palace). Stuffy they may be, but I was greatful for my tight fitting N95 mask.

This palace is located on the site of a palace previously built for the emirs (Arab rulers of Sicily) who built their palace on top of an old fortress possibly dating back to the days when Rome was the conqueror dejour. Roger 2nd (father of William 2nd) and his dad were the original bad-ass Norman conquerors of Sicily. Roger built this Romanesque fortress -cum-palace on top of the emir’s palace (complete with torture chambers). After the Normans got ousted by the French, who were later ousted by the Spanish, the seat of power was moved to another part of town and the palace languished. When the Spanish Bourbons ousted their Spanish Aragonese cousins, this iteration of viceroys moved their seat of power back to the decaying Norman palace, which they updated with baroque exuberance. (Sicilian history is a complicated mess of conqueror after conqueror after conqueror, all drawn by the island’s strategic naval importance and fertile lands. The mafia originally emerged in self defense.)

Perhaps fortunately for you, dear reader, most of my shots of dim royal palace interiors did not turn out, so you are spared images of naked cherubs cavorting above conference tables and video screens.

So on to the medieval stuff…

The Palatine Chapel was started by Roger 2 and finished by William 2. It predates the cathedral of Monreale by about 20 years, and features many of the same themes with (IMO) even more exquisite Byzantine artistry than its larger cousin. To get in, we had to queue…and queue…and queue…but we were exuberant about the wait.

Fortunately, there were a series of wonderful mosaics on the exterior of the chapel walls, which none of the guide books discussed in any detail. Supposedly, they represent the life of David, but I couldn’t make these scenes fit those stories. I mean, like, where is Goliath? (I suppose if you are the recent conqueror of a subjugated people you don’t want reminders of little guys felling bigger, badder guys?) In any case, the artistry was breathtaking.

Many of the same old and new testament themes are depicted in the chapel, although this was clearly a different set or artists thatn the crew at Monreale.

After exiting the chapel, we gratefully escaped to the Royal Gardens, where fresh air was abundant and people were scarce.

Then it was time to exit (via the gift shop, naturally), collect our bags and wheel our way down to Palermo Centrale to catch the train to Agrigento.