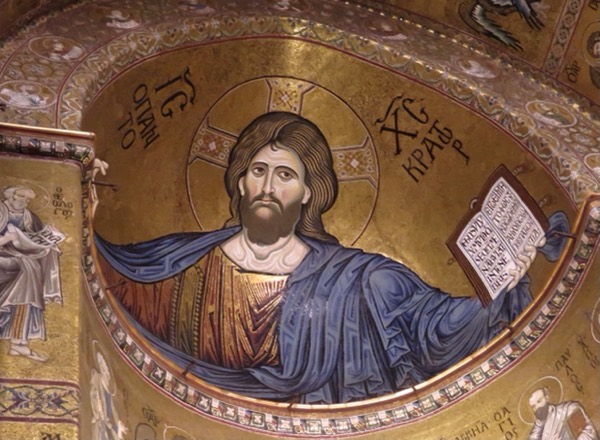 Saturday, after one of those extra long travel days, we arrived in Palermo, Sicily for the beginnings of a three week touristic adventure.

We are staying in the heart of downtown at Delle Vittorie Luxury Rooms & Suites
with spacious rooms, expansive breakfasts and lovely young ladies who are gently amused at my attempts to speak Italian.  The airport bus (pullman in Italian) deposited us a few blocks from our B&B midafternoon on Saturday. After a shower to shake off some of the brain deadening effects of nearly 24 hours of travel (with no sleep) we plunged into the raucous streets of Palermo.

Sunday morning, refreshed by a night spent prone instead of folded in half in “comfortable” airline seats, we set off for the bus that would take us to the cathedral of Monreale, a little village 30 kilometers uphill from Palermo.  Our walking route took us past Palermo’s cathedral…

…and past the Norman Palace and gardens

… to the bus stop at Piazza Indipendenza, where we spent an hour watching cars fill up with gas while waiting for l’autobus which never came.

After (finally) squeezing into the next scheduled bus (along with all the other stranded tourists), we rumbled up the mountain to the little village of Monreale.

The reason for putting up with such a long commute was the chance to see what may be the best preserved Byzantine mosaics in the world inside the Cathedral of Monreale. https://www.duomomonreale.com/ But first, the cattedrale’s environs.

William was Norman (a race of Viking raiders who settled down in Northern France and proceeded to take over much of the known world), married to Joan, the youngest daughter of Eleanor of Aquitaine and Henry 2nd (another Norman then busy consolidating his hold on England). Sicily was ruled by Islamic Arabs prior to the Norman takeover, and the Arabs had taken over from the Byzantine Turks (based in Constantinople) who were Greek Orthodox Christians. Architecturally, William’s cathedral represents a mixture of Romaneque (i.e., Norman), Arab and Byzantine styles unique to this time and place.

The mosaics, created from thousands of tiny bits of stone called tesserae with lots of gilding, are the glory of this place. They are Byzantine in execution (those who have visted Hagia Sofia in Istanbul will recognize the style), reflecting Christian themes, with the occasional “I’m the Norman big cheese, don’t mess with me” thrown in for effect. The artistry and workmanship of the images are simply staggering.

In a society where most people didn’t read, these mosaics served as teaching tools for bible stories – like the stained glass windows in French and English cathedrals. Here we see Adam and Eve being created; Adam and Eve being tempted by the serpent (nice that Adam was included for once); Noah and the ark, loading and unloading creatures; Lazarus being raised from the dead (my personal mummy favorite); Mary & Joseph on the way to Bethlehem, and William 2nd being blessed by the holy spirit (or maybe angels?). Finally, another personal favorite, St. Thomas a Becket, murdered in Canterbury Cathedral after Henry 2nd (father of Joan) famously roared “will someone not rid me of that pesky priest?”  Since Henry was William’s father-in-law, including this image must have provoked some interesting family discussions.

The cathedral also contains a lot of geometric mosaics, Arab style, gorgeous wooden ceilings, and various gaudy sculptural forms typical of medieval and baroque Christian churches. Interspersed among the tourists were families and getting ready to celebrate the kids’ first communion in a post-tourist service.

We climbed up many, many stairs to the terraces that circle the catheral’s exterior for marvelous views and close look at external decorations.

We had a very late lunch of delicious pizza (mine had bacon, pistachio pesto and walnuts) at Trattoria Monreale, right around the corner from the cathedral.  We then ambled down the hill to the bus stop, arriving to find that it was crammed to the gills with a dozen people already unable to board.  Rather than with another 1.25 hours, we climbed back up the hill and caught a taxi back to Palermo.  Stuffed from very large pizzas, we dined on hazelnut gelato and hit the sack.

3 thoughts on “Palermo and Monreale”