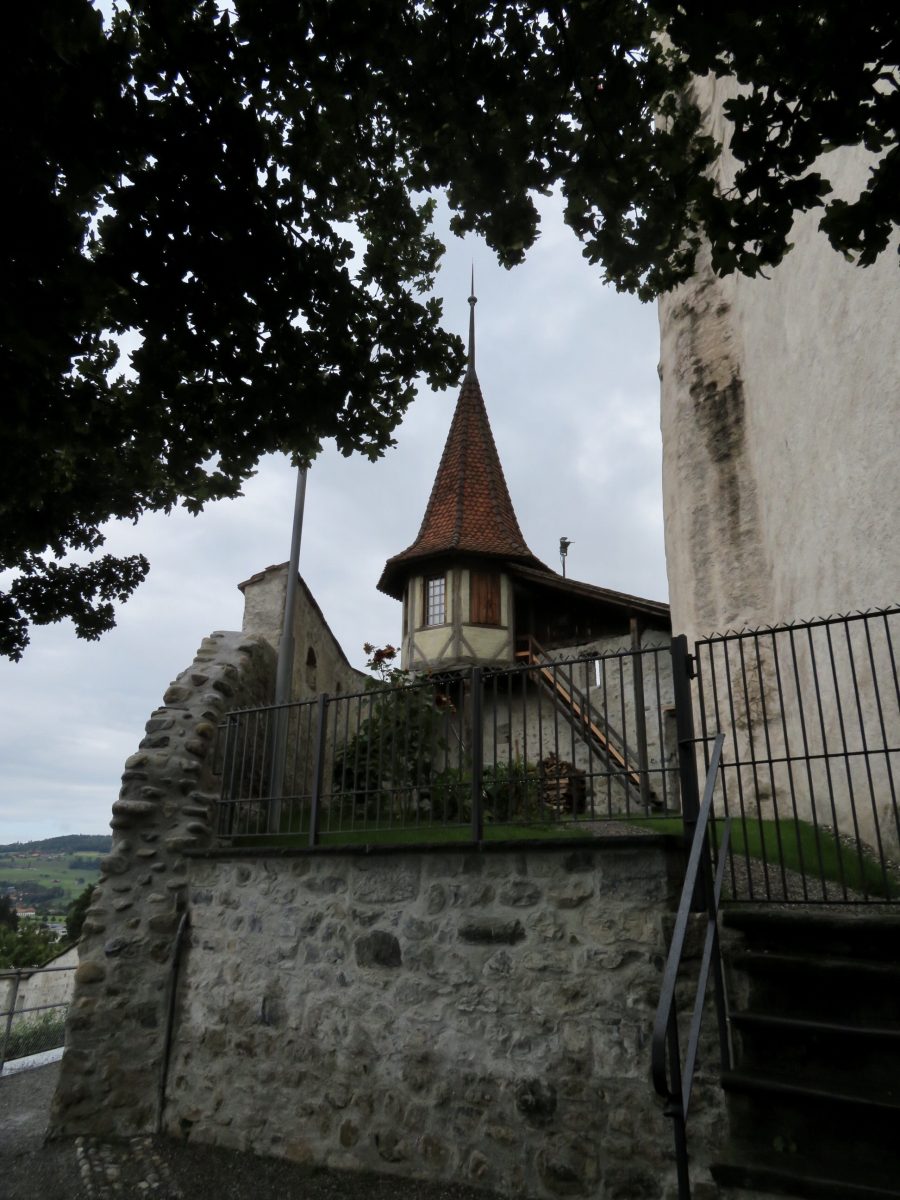 Sunday’s rainy weather was forecast to clear by afternoon, so we took trains to the area castle, Schloss Thun.

Grindelwald hosted a Morgan rally – the Jungfrau Treffen – September 5-7. We saw several of these classy 3 wheelers tootling around.

From the Grindelwald Bahnhof, we trained to the Interlaken Ost station, then transferred to the train for Thun. At Spiez, a group of performers boarded the next car carrying very large cowbells.

Rain was pouring down in Thün, much to the disgust of this very wet railway tabby. We picked up sandwiches at Bretzel Koenig (Pretzel King) with the optimistic expectation of an outdoor picnic.

The castle dates to the 13th century, seat of a minor Swiss dukedom that was quickly gobbled by rivals in Berne.  The exhibits reflected a certain grumbling about Berne’s dominance, lo these six centuries after the fact. In 2010, the City of Thun sold the castle’s properties to a private consortium which now operates conferences here. The donjon (aka castle keep or main tower) remains in public hands.

Backpacks were not allowed and had to be left in lockers in the ticket office-cum-visitor center.  One couple parked their very well behaved dogs with the backpacks. The frau handling tickets tolerated them with only minor eye rolling.

One of the castle’s six floors featured coats of arms for the region’s governors.  I thought the cash box was most honest, though the chicken got my vote for scariest beast.

The Bernese hipped roof, with roof beams dating to the1430’s, was everyone’s favorite.

All four towers were accessible – as along as your definition of “accessible” includes climbing near vertical ladders both up and down.

Towers and outside terraces gave 360 degree views of the surrounding area – a must for defensibility.

Leaving the schloss, we wandered cobblestone streets back to the Aarne river and stopped on a (somewhat dry) park bench for lunch. Many feathered friends joined us.

Don’s sandwich-in-hand was nearly nabbed by one exceptionally bold flyer.

One of Thun’s highlights are old wooden covered bridges on both branches of the Aarne.

With sluice gates open and high water, surfing was the Sunday afternoon thing for persons of a certain age – and agility.

The bahnhof cafe provided a warm, dry place to wait for the train, along with pastries, hot drinks and sugar-on-a-stick.

Returning through Spiez, the performers with very large cowbells were explained – a harvest festival. We got to see a bit of the parade from the train.

Interlaken has a huge CoOp, and we decided to shop there on the way back to Grindelwald. But the super market was closed, and we made it back on the train by barely a whisker.  So we made our obligatory daily stop at the Grindelwald CoOp instead.

We dined that night at the Restaurant Grund, located on top of the train station at the foot of the (censored) hill. Those of us with gimpy limbs wimped out and took a taxi. The food was good (although we all avoided the horse entrees).