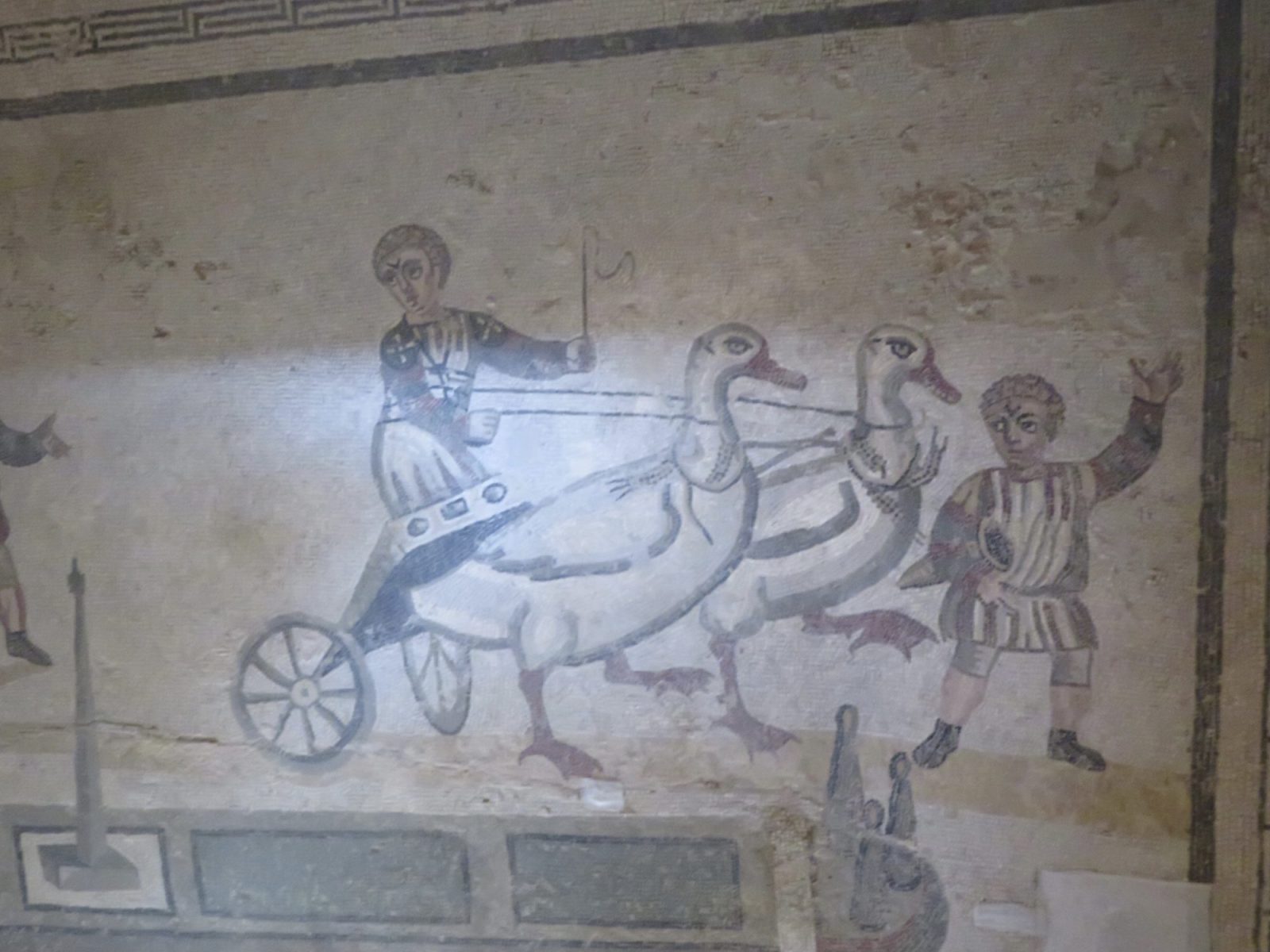 On Monday we bid a sad farewell to Ragusa Ibla, after being given a grand send-off from Emanuele. We drove to Taormina via a long detour in order to visit the Villa Roma del Casale.

Villa Roma was a very country estate large villa (37,600 sq. ft.) built in the late 3rd century CE by a member of the Roman imperial family. It was occupied, at least periodically, until the 12th century, when the villa was destroyed by fire, and then buried in 1161 CE – first in mud and then by a landslide. Those earthen burials preserved one of the most remarkable surviving collections of Roman mosaic floors in the world.

We arrived early, since viewing is from a series of catwalks built above the ancient floors and we hoped to avoid the crowds.  The usual horde of kids was unloading from 2 buses as we arrived, but they were somehow ushered through the complex in some way that we never really encountered them – thank goodness. Entry into the villa goes past a large tub used for washing dirty feet, than through the various hot and cold rooms of a Roman bath complex.

The villa’s owner apparently specialized in the capture and sale of wild animals that probably used as fodder for the bloody gladiatorial spectacles that comprised entertainment in the Roman world. The entry hall offers a kind of catalog of goods on offer.

A long rectangular room near the entry shows a chariot race in Rome’s Circus Maximus.

The 200 foot long Corridor of the Great Hunt shows Romans from every part of the empire capturing animals and loading them up for transport back to Rome.  I was rooting for the animals and happy to see that they took down a Roman or two along the way.

There was a room with little cherubs fishing from boats…

Maidens competing in a race, (affectionately known as “the bikini girls”).

In the children’s wing, kids mimicked adults by hunting animals on the estate. To my delight, the animals fought back.

On leaving Villa Roma, we found ourselves in a serious contest of wills with Google navigation. We wanted to take the motorway for the cross-country drive to Taormina. Google wanted us on scenic byways, with periodic detours into back alleys that shaved 30 seconds off our arrival time. Google won the first 2 rounds, but we finally triumphed. I thought the Google navigation brain would explode at our moment of victory.

After a long, uneventful and relatively pleasant drive through green, treed countryside and blooming borders, we arrived at our lovely Taormina base, Casa Manuel, perched on a hillside high above the Ionian Sea with Mt. Etna fuming to the south.