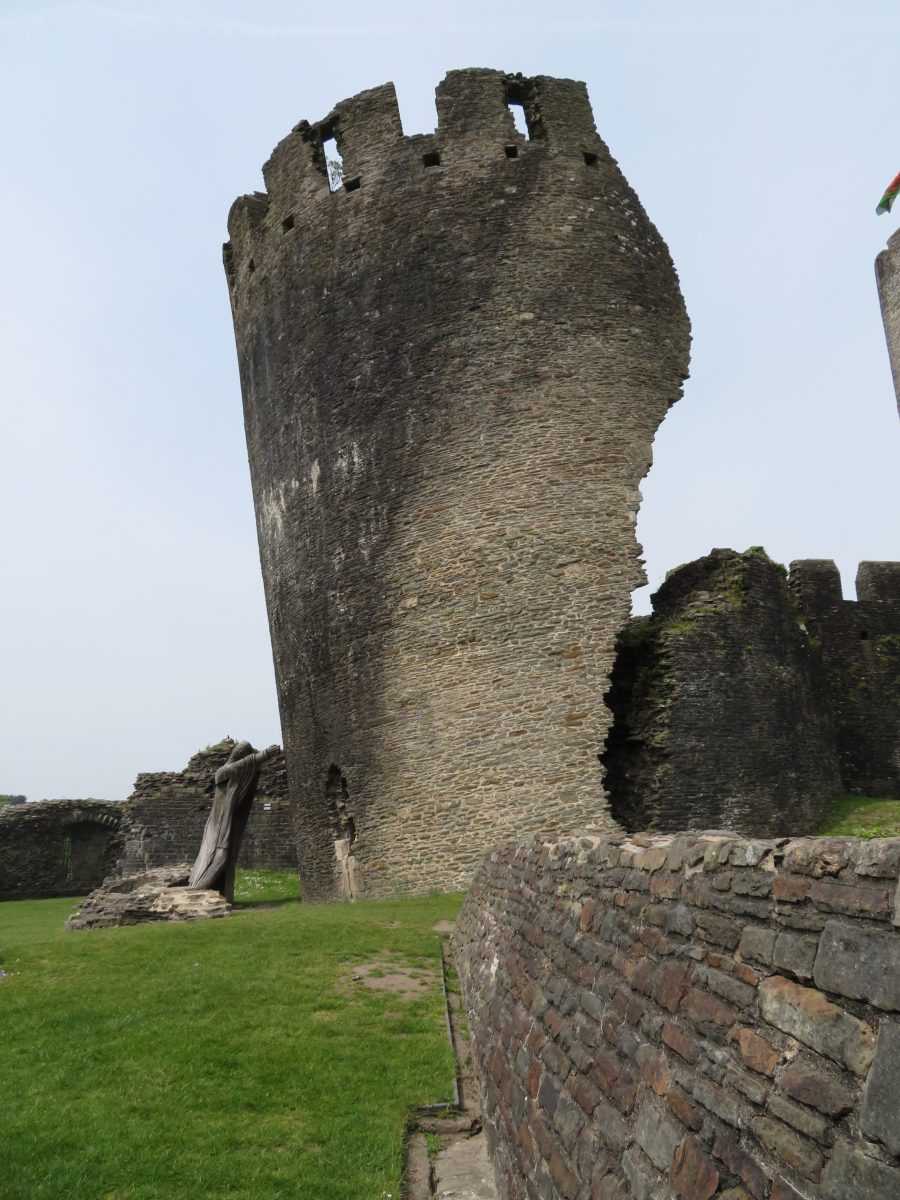 Like Cardiff castle, Caerphilly was reconstructed by the Bute family and donated to the Welsh government when double death duties and government confiscation of the coal industry made gifting them an attractive proposition. Unlike Cardiff, Caerphilly was not prettified by Capabilty Brown or William Burgess. It still retains its stark medieval grandeur – complete with moats.

Clever use of sound and imagery to recreate the movement of the portcullis.

Many of the interior spaces are accessible, and some have been furnished to give a sense of what was once there.

A surprising and delightful feature of this castle is the art encountered in unexpected places. Our favorite was this installation, titled “Four Heads – the villain, the king, his wife and her lover: A tale of power, greed, lust and violent death at the top of the medieval world.”

“The king was Edward II (1284-1327), a tyrant whose vicious rule and battles with his barons turned his kingdom against him. The villain was Hugh le Despenser (1286-1326), Lord of Glamorgan and owner of Caerphilly Castle. Hugh was a close friend of Edward’s, and aided and abetted the king’s tyranny. In 1325 Edward’s queen, Isabella (1295-1358) went to France, in theory to negotiate peaceful relations between her husband and her brother, the French king Charles IV but, in fact, she had other plans.”http://sconzani.blogspot.com/2017/04/caerphilly-castle-artworks.html

Here there be dragons, complete with a lovely voiceover narrating their story. Great interactive displays and activities – which we thoroughly enjoyed.

Note the display of siege engines in the middle of the picture, including trebuchet, mangonet. All were designed to hurl projectiles at and over those formidable walls.

We lunched at Glanmors Tearoom right across from the castle gates.

Like its castle – and Glanmors – Caerphilly town has a feel of stability and going back in time. Its high street still has thriving local shops.

Our best shopping find was the Plant 2 Plate store, with its passionate owner dedicated to eating local and producing zero waste in the domestic food chain. (Allison, this one’s for you.) We carried out a home-cooked meal for that night’s dinner in the flat.

Like all sensible communities, Caerphilly has invested in its public library.

In contrast to Caerphilly, Central Cardiff is an eclectic (and sometimes confusing) mix of architectural time periods – staring with its train station.

Lovely Edwardian buildings in the core, interspersed with modern and post-modern architecture.