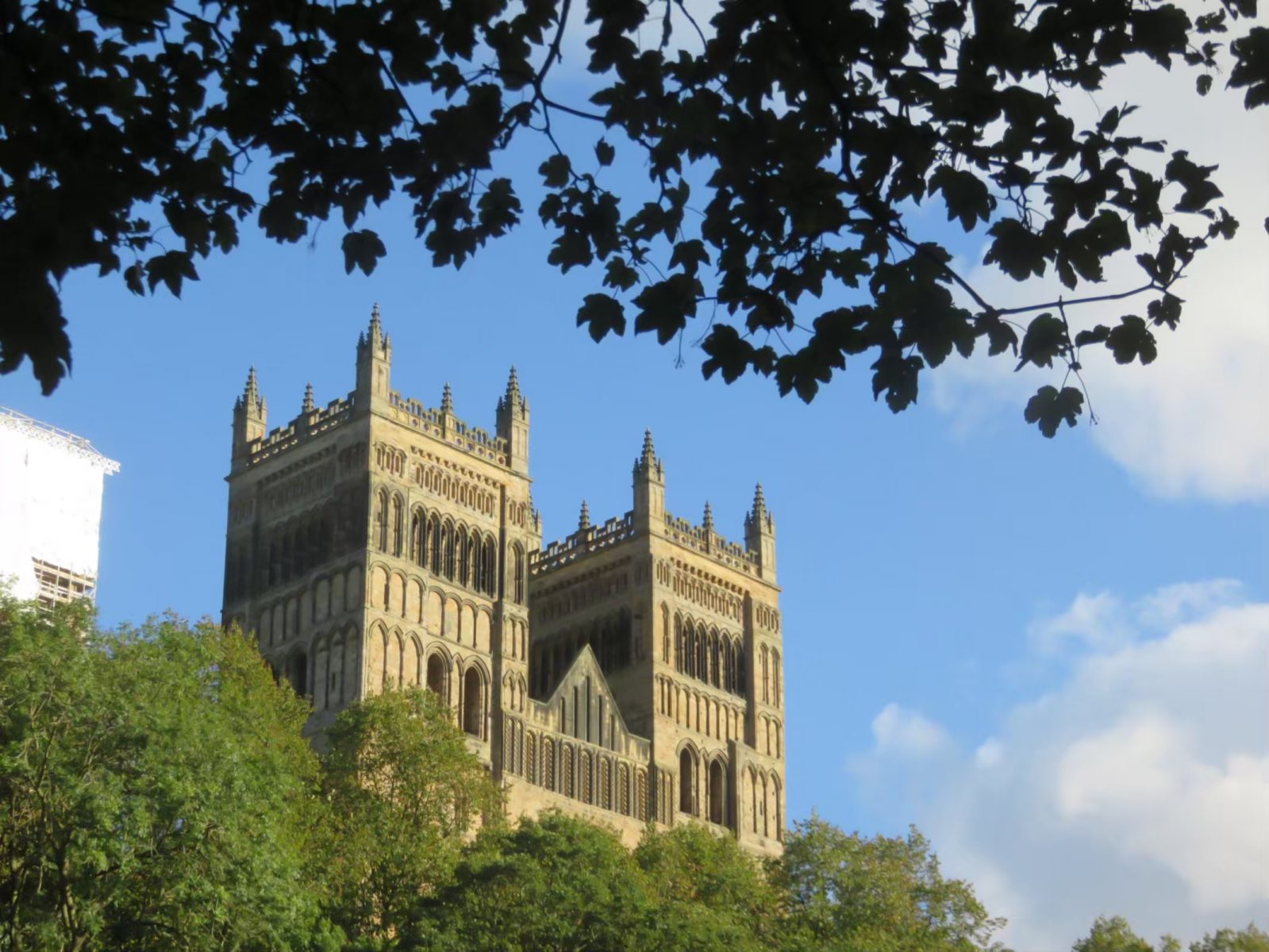 On Saturday we said farewell to Northumberland, heading south from Alnmouth train station to Durham, whose historic heart is located within a bend of the River Wear.

Our B&B (appropriately named “Castle View”) was in a quiet residential district, on top of the hill opposite the castle. Durham has a LOT of hills.

The peninsula is dominated by the castle – now part of Durham University – and Durham’s wonderful cathedral.  Saturday was an “Open Day” for the university, so the city center was thronged with 6th-formers and their parents touring colleges and checking out the university scene.

Durham cathedral is my favorite in Britain.  Construction began on the cathedral in 1093, following William the Conqueror’s destruction of northern England.  The Norman intimidation program included construction of castles and cathedrals to demonstrate (a) military dominance and (b) who had god on their side. Durham was completed in only 40 years, making it one of the few cathedrals built entirely in the same architectural style. (There is an addition at the back of the nave and some frilly later additions around the altar, but it’s otherwise all of a piece.)

Sadly, the powers that be now prohibit photography inside – the only cathedral I’ve visited with this restriction. I wondered why until I saw this notice in the place where all the best information is found: inside a toilet stall in the ladies room.

A special opportunity indeed – at 10 quid a head. Very much in keeping with Durham’s history of fleecing pilgrims, methinks.

Lacking the ability to take an infinity of snaps,  I grabbed some shots of Durham’s stunnning interior from the Durham World Heritage website.  I particularly love the austerity of this cathedral. The lack of sculptural adornment and fancy tracery provides a purity of line along the nave that is unparalleled, in my view.

I took these shot sbefore realizing that photography wasn’t allowed. This bit was added because the Benedictines wouldn’t let women inside the cathedral proper.  (There’s a line in the floor just inside the nave over which no feminine foot was to tread.) The chapel nearest to us (with the wooden kneeling desk) holds the tomb of the Venerable Bede, an 8th century monk/scholar who wrote the first history of Anglo-Saxon England.  (The medievalists among us will ooh and ahh.)

Durham is the first English cathedral to use ribbed vaulting in the ceiling, an innovation that elevates and lightens the otherwise heavy Romanesque interior. Our cathedral tour guide said that the Benedictine monks who inhabited the abbey saw the ribbed ceiling as the keel of a ship turned upside down – a ship lifting the faithful to heaven.

William and company chose Durham because it was already a sacred site: the last resting place of the peripatetic Cuthbert, whom we last encountered at Lindisfarne.  “Rest in peace” was not Cuthbert’s epitaph, at least for the first 300 years after his death. His body was dug up and carted all around Northumberland by monks trying to keep his remains safe from Norse raiders (and likely squabbling over who got to keep the economic gold mine that his remains represented).

Legend says that Cuthbert put an stop to the wandering by making his coffin too heavy to lift, then reinforced the message with a vision of “dunholme” followed by the timely appearance of a maiden searching for her lost dun cow. Such is the stuff from which great power centers –  the Prince Bishops of Durham – were born.

More prosaically, the bishop’s son-in-law was Uhtred, Earl of Northumberland, and Durham was included among the family lands. A plateau surrounded by steep hills with a river on three sides would look mighty attractive to people searching for a site they could defend against marauding Danes.

Cuthbert is still buried at Durham, in a (still much visited) shrine located behind the main altar.  Today’s shrine is relatively austere, but the original must have been a sight to behold: “It is said that just one of the many jewels decorating the shrine would have been worth a king’s ransom.  The base of the shrine was made of expensive green marble and gilded. In the base were four seats, where pilgrims – especially the sick and lame – could kneel to receive the blessings of God and St Cuthbert.”   Only Cuthbert’s body survived the depredations of Thomas Cromwell during Henry VIII’s dissolution of the monasteries.

The cathedral recently turned the monk’s dormitory into an exhibit hall called “Treasures of St. Cuthbert” which reportedly houses “some of the world’s most precious Anglo Saxon artefacts.” Sadly, the dormitory was closed the weekend we were there as exhibits were being changed.

This is a replica of the Durham “sanctuary knocker” (original is in the Treasures exhibit). In medieval times, if you could manage to escape your pursuers long enough to grasp hold of this ring, you’d be entitled to sanctuary for 37 days – long enough to come to trial. The image is meant to be the Anglo-Saxon’s view of the entrance to hell.  “If you look closely, you can make out a man being eaten by a lion, which is being eaten by a double-headed snake. It was meant to be hideous enough to ward off evil spirits.” Well OK, then…

I loved these flower sculptures constructed from sedums and semperviums.

Because we are always suckers for a boat ride, we hopped aboard the Prince Bishop River Cruiser for the slowest – and possibly shortest – river cruise of all time.

Walking paths on both sides of the river make for pleasant wandering in a semi-natural setting. These shots are from Saturday afternoon’s wander round the peninsula and Sunday morning’s walk downstream to the Crook Hall and Gardens.

Salmon were trying to work their way upstream to spawn – heavy going against the weirs and greedy birds.

The family occupies part of the Georgian section of the house, and brings in extra income by renting out certain rooms and portions of the grounds for events.