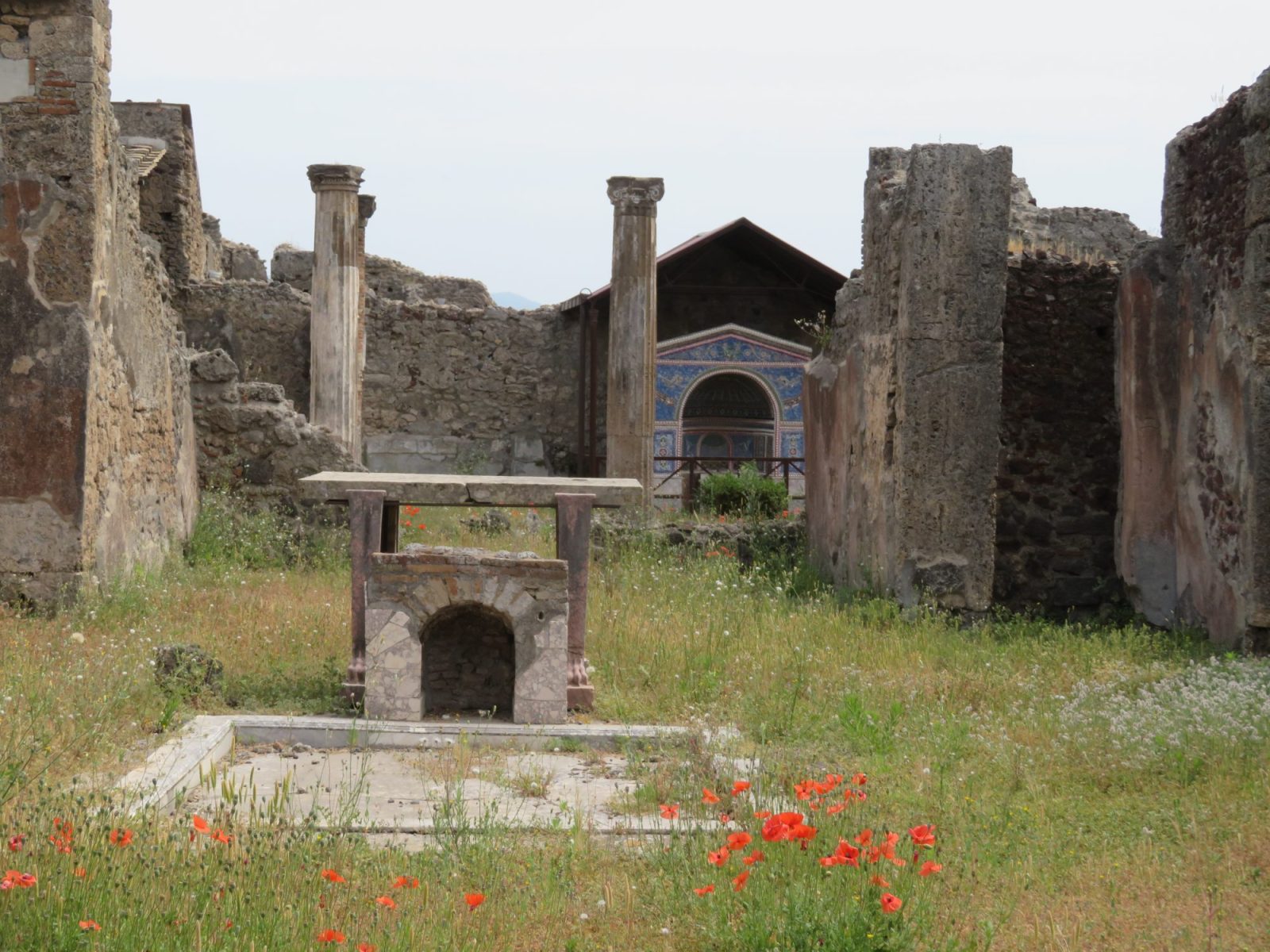 Tuesday at 7am we were back on the Freccia Rossa heading out of Roma Termini to Naples for a transfer to the Circumvesuviana, the suburban commuter train that passes the archeological site of Pompeii.

A settlement was present on the site of Pompeii as early as the 8th century BCE. Originally, the town was right on the sea, built on a plateau about 120 feet above sea level, with a large port. When the Greeks arrived in Sicily and Campania (the region south of Naples), Pompeii became an important trading port in the Greek world. The town was a conquest football between Etruscans and Siracusan Greeks, then Greeks and Romans, and finally ended up as a seaside trading and resort town within the Roman empire.

In the first century CE, Pompeii was a thriving, culturally and ethnically diverse community of about 20,000 people drawn from all over the Roman empire. How do we know this? Because modern archaeology focuses more on everyday lives, trying to build up a picture of how people lived in ancient spaces. In Pompeii, this picture is based on architecture, street layouts, graffiti, art and even tavern kitchen middens (where herbs and spices from all over the empire are found in the waste). There were more than 40 bakeries, 130 taverns (most serving fast food), restaurants, hotels, baths, and 30 brothels. Rich and poor lived more-or-less side-by-side, and there was a thriving middle class which included many “freedmen” – former slaves who had been freed by their owners and operated many of the businesses in town. Archaeologists have been able to trace some of these freedmen survivors into nearby towns and track their lives after that fateful day in 79 CE when everything stopped.

If you are interested in what the community of Pompeii was like, I recommend Annalee Newitz book Four Lost Cities: A Secret History of the Urban Age. Her section on Pompeii summarizes the most recent archaeological work in a way that really brought the city to life for me. (I also really liked her section on the Native American urban center of Cahokia, which stood beside the Mississippi River in East St. Louis.) If you prefer your history wrapped in fiction, Caroline Lawrence’s Roman Mysteries are a great way to vicariously experience 1st century Roman life. Her protagonists are a group of plucky 8-10 year olds who get involved in various mysteries while encountering social issues of the day and visiting locations that are archaeological sites today. Here 2nd book (there are 17!), Secrets of Vesuvius, finds our heroes summering at a villa located a few miles southeast of Pompeii when Vesuvius blows its top. The book paints a vivid picture of the days before and after the eruption, and of the impacts to the region for months thereafter. FYI, you can get the entire collection on Kindle for $10.99 – they are really fun!

The modern town of Pompei continues its ancient predecessors’ mercantile heritage. This is part of the shopping-and-eating gauntlet tourists run from the train station to the archaeological park’s entrance.

Pompeii was a walled city with at least 6 gates. Visitors today enter through the Port Marina, which bordered the sea before Vesuvius blew and extended the shoreline several miles west.

Pompeii’s streets were paved with stone in the more commercial and wealthier parts of the city. Streets also served as gutters and waste disposal systems, with water flushed down the streets daily.

As we made our way through Pompeii’s streets looking for specific places – not an easy task, even with maps – we encountered a familiar refrain. Like so many sites in Italy (and around the world) Pompeii’s buildings were deteriorating at an alarming rate, leading to outcries and an influx of money from the UN, EU and private donors. Today, numerous excavations and renovations are underway at Pompeii, and most of the places on our list were closed due to ongoing work. Unfortunate for us, but very fortunate for the dozens of archaeology grad students we saw sifting dirt and sweating in sunny courtyards.

The best of the surviving frescoes, mosaics and statuary were hauled away to the museum in Naples 150 years ago. But there are still remnants of decoration here and there, and some replicas of notable pieces in a few villas.

The House of the Faun was partially open. It has 40 rooms and covers an entire city block. The MANN holds a lot of art from this villa, with replicas on site for a few works.

One of the treasures from the House of the Faun is this floor mosaic illustrating Alexander the Great’s triumph over Darius of Persia in 333 BCE. There’s a (faded) replica on site with the gorgeous original holding pride of place in the MANN.

More interior Pompeii mosaics and paintings held in the MANN

Wandering the streets of Pompeii, with MANN artifacts dropped in.

Taverns are easily identified by the storage and serving containers built in to counters. Given the high proportion of taverns to population, historians think that a good portion of the lower and middle class residents bought the bulk of their food from local bars/cafes – just like today, in similar pre-urban settings. Businesses occupied most ground floor spaces, with residences above and behind, and the danger of cooking fires causing havoc was great.

One business that was open for tourist drop-ins was the Lupinare, Pompeii’s most famous brothel. Naturally, there was a queue. The wall frescoes provide illustrations of the entertainments on offer.

A hilly spot provides panoramic views of Pompeii and its surroundings.

Gardens have been restored in some locations. I thought this was an especially lovely one.

Exiting the park through the lower Porta Marina.

We caught the jam-packed commuter train back to Napoli Centrale, where we grabbed a late lunch of fried chicken “toasties” (paninis in our parlance) before catching the nearly empty Freccia Rossa back to Rome. (We were in business class, which was never full on our journeys.) Our dinner that night reminded me of Pompeii. Our Roman flat was in a multi-ethic neighborhood, with lots of south and east Asian shops and restaurants. We had dinner at a restaurant two doors down offering Italian cuisine, but operated by (and mostly patronized by) Chinese-Italians. I enjoyed listening to the mix of Italian and Chinese languages, and thought of those diverse folks enjoying dinner in Pompeii two millennia before.