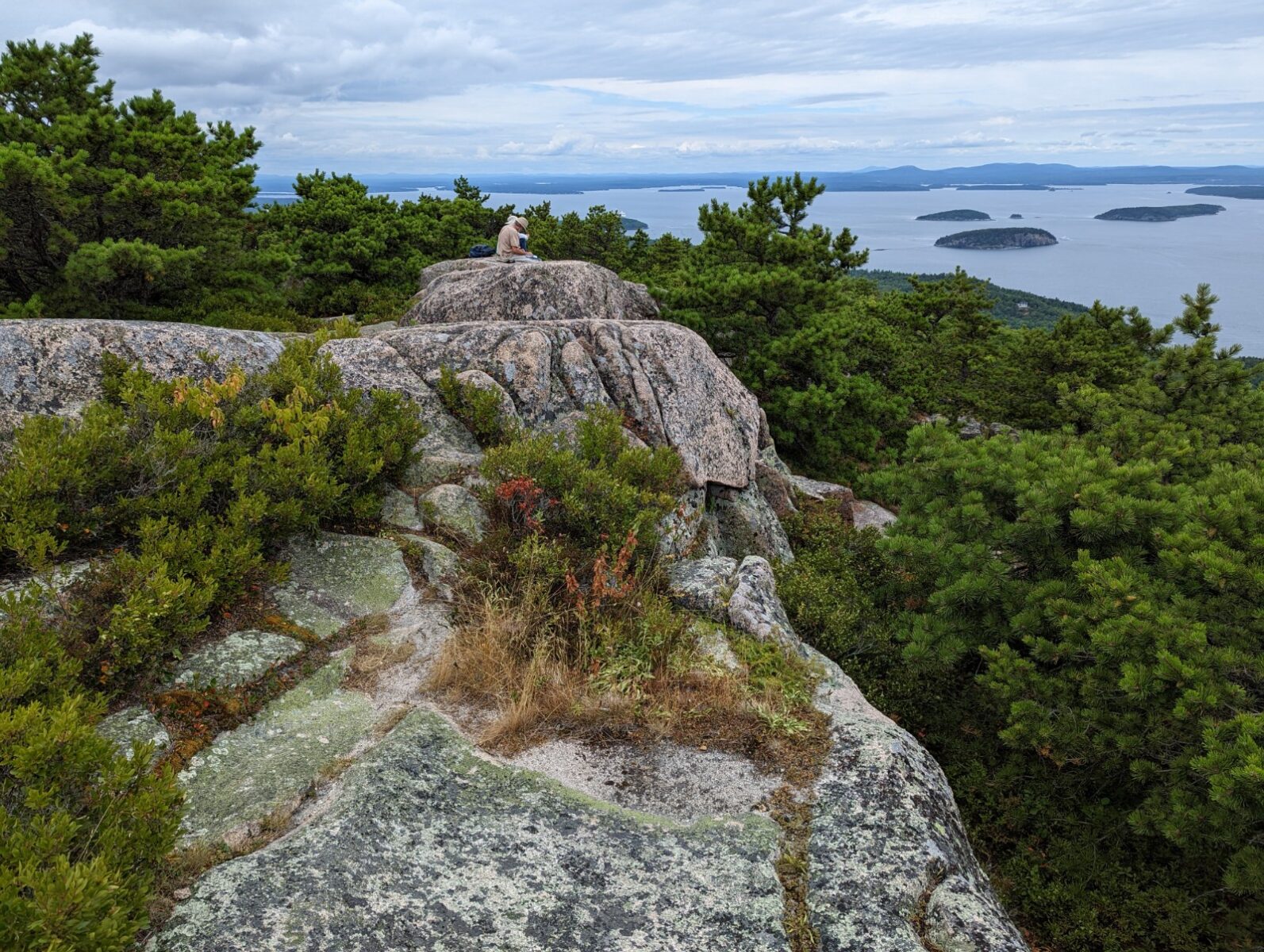 On Wednesday, Matt and I split up to pursue separate adventures. Acadia has many steep and difficult trails, including some featuring “via ferrata” type climbing routes, complete with iron rung ladders, bridges and hold-on-tight handrails. Matt headed off to Acadia’s most difficult hike, the Precipice Trail, while I meandered ’round the gentle inclines of Sieur de Monts.

Here’s what the National Park Service says about the Precipice Trail:

“Rising over 1,000 feet in 0.9 miles, the Precipice Trail requires physical and mental strength. It is a rugged, non-technical climb with open cliff faces and iron rungs. Upon reaching the summit of Champlain Mountain, climbers are rewarded with impressive views. It is not recommended for small children, for people with a fear of heights, or for anyone in wet weather. Descending the Precipice is dangerous and not advised.

My, oh, my. Matt provided pictures, but no commentary – except to note that it would have been a lot easier 30+ years ago (the last time we were in Acadia). Matt says it wasn’t particularly scary, but some of the “bouldering” maneuvers taxed his aging knees and back. He was popped when he got back to the Inn. So here is Matt’s visual tour.

It’s a walk of about 2.5 miles from Bar Harbor to the nature center at Sieur de Monts. I caught the Island Explorer #10 bus in town and walked back.

Sieur de Monts spring is the original focal point of this compound. Sieur de Monts (Lord of Mountains) was title given to a French nobleman named Pierre Dugua back in 1603. He was appointed governor over all of North America between the 40th and the 46th parallels (from present-day Philadelphia to Cape Breton) by the French king Henry IV. Lest we forget what colonialism was about, Dugua’s commission was “to establish the name, power, and authority of the King of France; to summon the natives to a knowledge of the Christian religion; to people, cultivate, and settle the said lands; to make explorations and especially to seek out mines of precious metals.” He was also given a monopoly on the fur trade. Dugua founded a couple of unsuccessful colonies, then his fur monopoly was rescinded and he returned to France in 1607.

For some unfathomable reason (at least nothing I could find), George Dorr, one of Acadia’s founders and its first superintendent, named a spring after the Sieur de Monts. He built a quaint little spring house and carved the motto “Sweet Waters of Acadia” onto a nearby boulder. When the Acadia area was first given national status in 1916, it was called Sieur de Monts. The name was changed to Acadia (“place of plenty” en français) in 1929.

The Wild Gardens of Acadia are located right next to the Nature Center. Acadia has a lot of plant diversity, and the Gardens present live groupings representative of 13 ecosystems within the park, all within a space of less than 1 acre. The Gardens were established in 1961 by volunteers who planted more than 400 indigenous species. In 2010, the Gardens affiliated with Friends of Acadia (a nonprofit that fundraises for the park) and are now maintained by a (paid) gardener, a summer intern and a small platoon of garden volunteers.

There wasn’t a lot of bright color in August, but I appreciated the rich variety of textures, shapes and different shades of green.

After wandering the Gardens (and dropping a donation in the handy box), I set out on the Jesup Path to join the Great Meadow Loop for the walk back to Bar Harbor.

The Jesup Path is a long boardwalk that runs across a bog through a white birch forest. It’s normally rich in birdlife, with over 70 species present. Unfortunately, the summer had been so hot and rain so sparse that the bog was almost entirely dry and there was little life to be seen or heard.

The Great Meadow Trail runs beside an enormous grassy meadow, then parallels a road into the outskirts of town. It was a pleasant walk – nothing special.