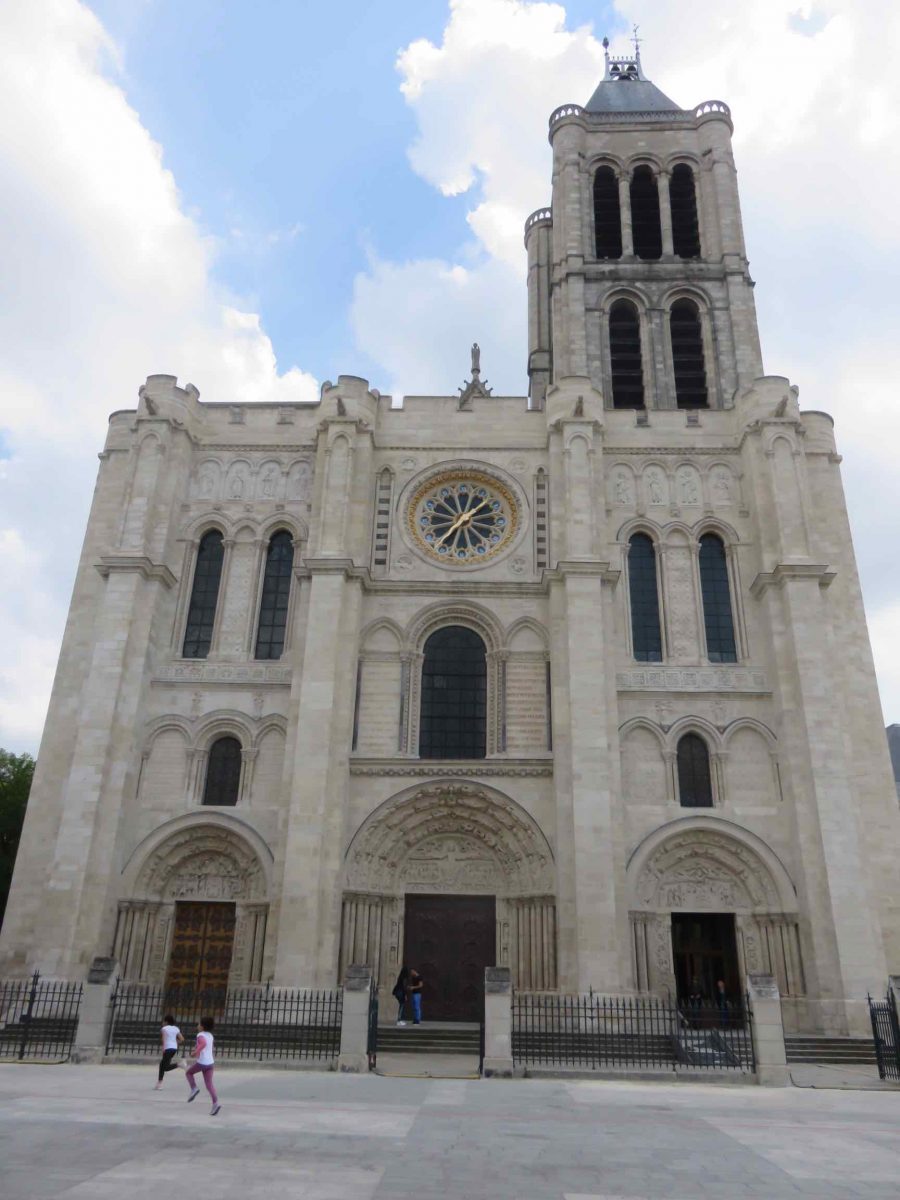 We hopped the RER train again on Monday morning, this time headed for one of Paris’ northern suburbs, St. Denis, home to the very first Gothic cathedral.

Our arrival station had something I’d never seen before: glass barricades separating the platform from the track.

And, since we were in France, a carousel greeted us on arrival at the cathedral square.

The Cathedral of St. Denis is named after the 1st Bishop of Paris, now the patron saint of France. He was decapitated on Montmartre around 250 CE (during one of those periodic Roman purges of Christianity), then picked up his head and walked several miles to the St. Denis cathedral site while preaching a sermon from his disembodied head.  Body and head were buried in the Gallo-Roman cemetery that occupied the site at the time, and quickly become a pilgrimage site.

A Benedictine abbey was built here around the 6th century, and it became the burial site for most of  the queens and kings of France from that time forward. The royal cadavers (what was left of them) were removed from their monuments and tossed into a common grave during the French Revolution, then dug up and re-interred (in a jumbled mass) beneath the floor in the cathedral’s crypt.  But the several hundred monuments erected to the royals remain, in all their marble splendor.

However, these remnants of royal glory are not what brought us to St. Denis. (In fact, we didn’t even realize that the royals were in residence – so to speak). What brought us here was the architecture: medieval splendor in stone and light.

Before St. Denis. cathedrals were built in the Romanesque style: thick walls with blocky Roman arches, small windows and dark interiors (like the church of St. Trophime in Arles). Abbot Suger, Eleanor of Aquitaine’s archenemy, built the cathedral in the 12th century as part of a vase monastic complex.

St. Denis was the first cathedral to use flying buttresses and rib vaulting, two innovations that allowed walls to soar and open to the light.

And the light is glorious indeed.

St. Denis has also become home to an assortment of wooden altarpieces and furnishings collected from defunct churches, convents and abbeys. Unfortunately, these curiosities blocked the otherwise splendidly open ambulatory at the rear of the cathedral.

Everywhere you look there’s a masterpiece in stone.