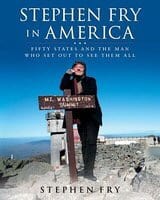 I’m dipping into JLF authors in anticipation of the feast to come. Stephen Fry in America, the print version of his award-winning BBC documentary series, provides a delightful appetizer.

“I was so nearly an American. It was that close. In the mid-1950s my father was offered a job at Princeton University–something to do with the emerging science of semiconductors… I was ten when my mother made me a present of this momentous information. The very second she did so, Steve was born. Steve looked exactly like me, same height, weight and hair colour. In fact, until we opened our mouths, it was almost impossible to distinguish one from the other. Steve’s voice had the clear, penetrating, high-up-in-the-head twang of American. He called Mummy ‘Mom’, he used words like ‘swell’, ‘cute’ and ‘darn’. There were detectable differences in behaviour too. He spread jam (which he called jelly) on his (smooth, not crunchy) peanut butter sandwiches, he wore jeans, t-shirts and basketball sneakers rather than grey shorts, Airtex shirts and black plimsolls. He had far more money for sweets, which he called candy, than Stephen ever did. Steve was confident almost to the point of rudeness, unlike Stephen who veered unconvincingly between shyness and showing off. If I am honest, I have to confess that Stephen was slightly afraid of Steve.”

America through Stephen’s eyes is a land of people, not stuff.

“Most people who are obsessed by America are fascinated by the physical–the cars, the music, the movies, the clothes, the gadgets, the sport, the cities, the landscape and the landmarks. I am interested in all of those, of course I am, but I (perhaps because of my father’s decision) am interested in something more. I have always wanted to get right under the skin of American life. To know what it really is to be American, to have grown up and been schooled as an American; to work and play as an American; to romance, labour, succeed, fail, feud, fight, vote, shop, drift, dream and drop out as an American; to grow ill and grow old as an American.”

It is a delight to see places I know and love through the lens of Stephen’s gentle, self-deprecating humor.  Here’s Aspen:

“They tell me the skiing is first rate, absolutely first rate. Stephens don’t ski, however, so this news is of little more than passing interest to me. I do like alpine resorts though; I enjoy the fresh air, the dazzling whiteness and the rumbustious rosy-cheeked cheerfulness of the adults and children. I have been on several skiing holidays where I have been content to get myself a ski-pass and be transported every morning to the highest café where I will sit writing letters, reading and sipping hot chocolate with rum in it while my friends fizz down the slopes. We meet for lunch and the whole thing is repeated in the afternoon.”

Sadly, Stephen’s ramblings did not take him to Boulder. He landed in that Other Place some 60 miles north. What could he have been thinking?

Perhaps we can rectify his mistake next September, when JLF returns to Boulder?