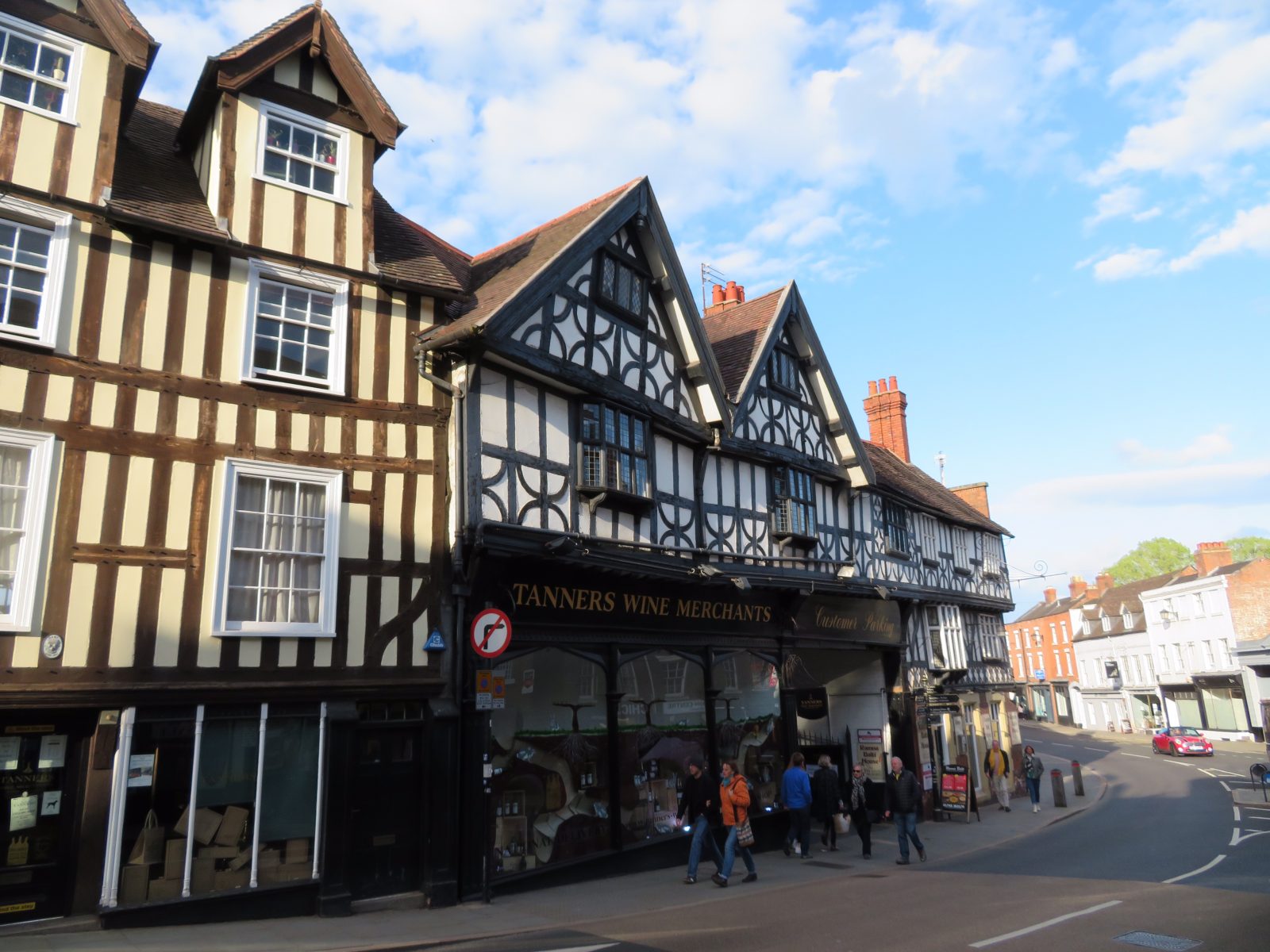 Saturday morning we left Fowey for the long train ride north to Shrewsbury.

We traveled three legs, with different train operators: Par to Bristol Temple Meads on Cross Country; BTM to Newport South Wales on Great Western; and Newport to Shrewsbury on Transport for Wales.

The Cross Country train originated in Penzance and was packed, with people standing and sitting any old place in the vestibule. We had tickets in advance, but never quite figured out the reservation system so played a bit of musical seats along the way.

The second train was less crowded, and arrived at Newport with only 4 minutes to catch the next. We scrambled up stairs and across the bridge to another platform with 30 seconds to spare. No pictures of Newport station, but here’s the trolley cart on the uncrowded train into Wales.

Shrewsbury station sits adjacent to the town’s castle, now a museum (and closed on Sunday so we didn’t see inside). The station was packed and crawling with taser-toting constables (one woman counted 17) in preparation for a big football match between Shrewsbury and its chief rival. This pair of the station’s grotesques capture the experience.

Our two nights here were booked at the Anton B&B, just across the river from the town centre. Our room was in the garret – we felt like chambermaids from Downton Abbey.

Shrewsbury’s Abbey was a major power in the 12th-16th centuries, and Ellis Peters’ 12th century Cadfael series is set here. Sadly, Henry the 8th and Victorian train builders destroyed and demolished most of it. Only one arm of the church remains, rebuilt by Victorians into a parish church.

This pulpit is all that remains of the medieval church, which once stretched all the way into the parking lot.

Saturday late afternoon was gloriously sunny so we crossed the English bridge to stroll along the river and into the old town.

Our hostess, Louise, recommended a wander through The Dingle, a garden dedicated to the first radio and TV gardening host who had great influence on the British gardens we see today.

The day ended with a marvelous dinner at the Peach Tree. Fortunately, We escaped before the Bride Squad got rowdy.

Sunday was cold, and the WiFi at our B&B was wonky, so our wanderings were interspersed with stops at coffee shops. We took a a walking town tour which was great fun – learned a lot about Shrewsbury’s ancient buildings and history.

The old town has many “shuts” connecting winding streets, and many gorgeous original timber buildings.

This timber framed building was renovated in 1991.

Following an ancient tradition. The architects used the decorative shame to make political statements. On the left is Maggie Thatcher and her chief minister commemorated with grasping hands in honor of her hated poll tax. On the right we see Shrewsbury’s modern vehicle congestion depicted around the river bend framing the town.

St. Mary’s church is the only one of Shrewsbury’s five medieval churches to survive relatively unaltered. Sadly, we weren’t able to go inside because it is closed on Sundays. (Ironic, that.)

At the turn of the 17th century, oak timbers were reserved for shipbuilding (the forests having been mostly clear cut) so brick houses became fashionable. Many timber houses were cut and assembled offsite, then disassembled and moved to their permanent location, making them easy to move after the fact. This glorious specimen was moved by a rich merchant who wanted a new brick residence – and a separate ho,e for his mistress.

We lunched in a not-quite-tall-enough-for-me near the Bear Steps.

Then retraced our steps to the old Music Hall on Market Square where we hung out for an hour in Stop, the lovely museum cafe.

We walked back via the Welsh Bridge, encountering this monument to Darwin and DNA along the river.

We passed on the Crown’s offer of gainful employment, opting instead for a picnic dinner in our attic room.